I now "have a chiropractor".  Yay.

I've been having back troubles for the last coupla weeks . . . not debilitating, just really annoying.  But they wouldn't go away.  And then on Sunday last, I did two things that apparently aggravated the situation:  First, I did a bunch of dishwashing in the morning, stellar husband that I am.  Don't know about you, but for me, leaning over a low sink and scrubbing charred remains off a broiler pan has always been a recipe for a backache.

Second thing I did was go for a ride.  Probably not the smartest thing, I'll admit.  But it was pretty much going fine, I thought.  Until I leaned over and picked up the bike and the righteous load, after taking this picture.   My back seized up and exploded in pain.  Fast forward to Monday morning and I could barely function.

I quickly polled a group of friends, family and co-workers that I knew had dealt with back problems about chiropractor vs MD, and referrals, and a hundred other questions, and ended up making an appointment with a guy I think is gonna be good.  Saw him this afternoon.  He says he can fix me up pretty quick and that we're not talking about surgery or anything.  Sweet music to my ears.  He wrote up this layman's report for me: 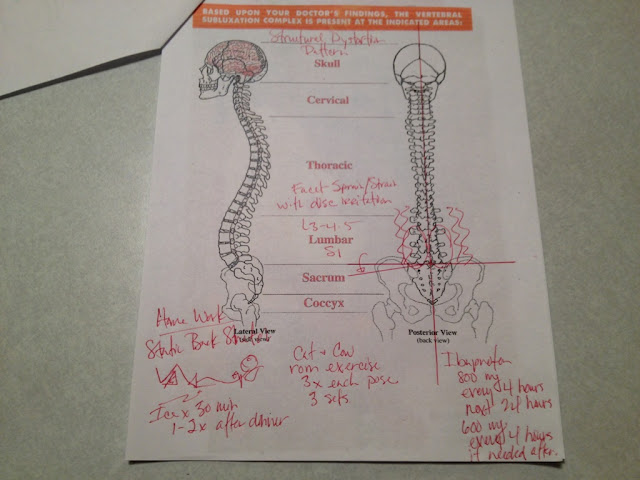 It's clearly designed to speak to the simplest of minds but is still too technical for me.  I will say that the pictorial representation of the pain is pretty accurate, which give me great confidence in him: 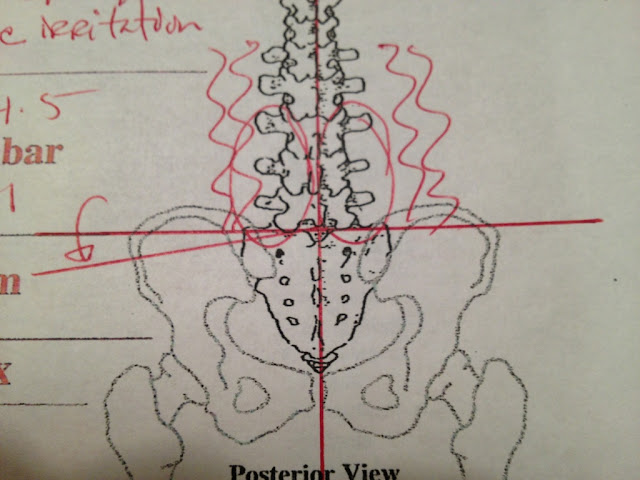 I certainly have much to learn about my back and how to heal it and take care of it.  But my main takeaway so far is that I have no business doing dishes from this point forward.  Vacuuming also seem like highly risky behavior.  Washing windows is clearly out of the question.  My biggest problem at this point is how to break the news to Patty.
Posted by Pat S at 11:57 PM

Bummer, Pat. But you should be fine after plenty of rest. Patience. And don't feel obligated to post photos of yourself demonstrating the cat and cow exercises in the no-food section of Benneditos.

On the bright side, can I borrow the Pugsley?

I throw my lower back out every now and again, that diagram looks mighty familiar. I've found that doing a little yoga and going for the occasional swim helps out a whole lot and are nice to do anyway.

I had a few trips to a chiropractor, and she told me to take my wallet out of my back pocket. I hope your spine gets back to normal that easy. I also let more air out of the tires on the pug, single digits make for smoother commutes.

I find it interesting most chiropractors cut their diagram off at the legs and never show the hamstrings. I would get lower. Backaches, so I tried doing more sit-ups. That didn't do it, so then I thought it might be my hamstrings are too wound up, so I started doing leg curls. That seemed to help a bunch

Ever notice that pain lines and stink lines are very similar?