So in the evolution of my discovery and understanding of what's making my back hurt, I now have radiographic images, thanks to a prescription from my chiropractor and the fine folks at Inland Imaging (Valley branch), who totally got me "in and out". It was an amazing display of medical office efficiency that I'm not at all used to and which caught me more than a little off guard.

It's pretty much a case of way too much information in the hands of a fool, but it's also pretty interesting . . . I'll try to explain what the chiropractor told me, after being filtered through the mind of a guy who barely made it through high school biology.

First off, I have a congenital defect whereby my tailbone (Sacrum) is in two pieces. It's supposed to be all one. Where the two pieces didn't fuse, my body grew a new disc where one isn't supposed to be, to compensate. Since the non-fused piece is off center, so is the new disc and the structural load path (this is the lone part I could get my engineering head totally around) is all messed up. Curvy and unbalanced. Not good.

Here's an image of the sacrum and where it fits into the bigger picture. 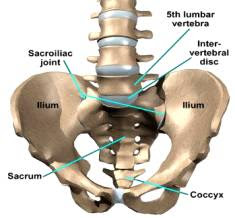 Here are a couple of my actual X-rays. You don't care, which is good, because I can't explain much of the fine detail.  The main thing that shows up though is that nothing is straight or symmetrical - my spine is all off centered and curvy.  Good for causing pain. 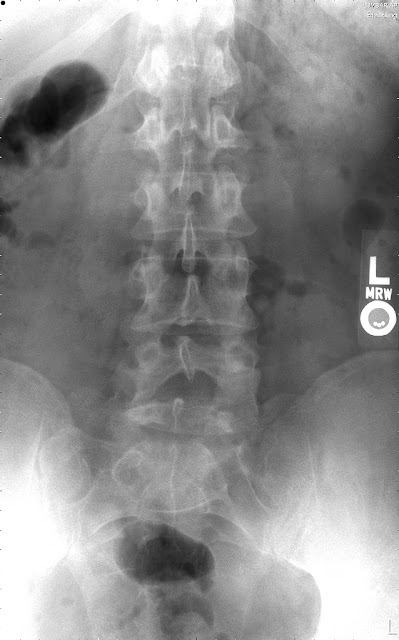 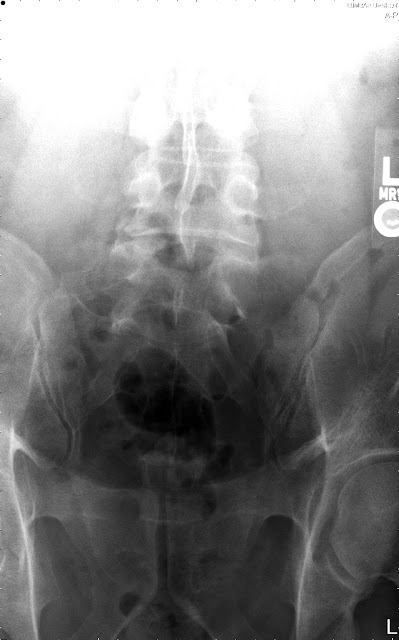 As for what's behind the title of this post, I can't ride and don't know when I'll be able to. Just working the back problem at the moment. I should probably be depressed or panicked, but I'm neither - I think I'm still in the mode of trying to process what it is.

The thought of whether I'll ever be able to ride a bike farther than the grocery store does cross my mind, I'll admit. But the chiro says I should be fine in a few weeks and I choose to dwell on that instead. It's definitely a weird time, though - after more than a decade of spending a majority of my free time thinking about and then implementing bike ideas, I'm no longer in the position to implement shit. If I can't ride, what's my new job? I just hope I don't have to deal with changing over from a bike blog to a swimming blog.
Posted by Pat S at 9:33 PM

Good luck on your recovery!

For now, what about a recumbent? Maybe Jon will let you borrow his beard, until yours grows in.
- Ventura

Good luck on your recovery. We're all pulling for you. Lord knows none of us will stick around if you resort to a swimming blog...

The medical term for congenital hinged tailbone is spruti patooti, in case you need to google it.

I'm pretty sure I could get behind a swimming blog. As long as you wear speedos. Also, can my post sound any more gay?

I would suggest getting yourself a physical therapist that specializes in sports injuries. Lisa has his contact information if you are interested. Shoot me a text.

Ventura, a recumbent. Hadn't even thought about that. Hmmm. Think I'll give swimming a try.

Alan, thanks for the good advice today. Much appreciated.

Anon, thank you very much. Valuable tips like this are what makes blogging worthwhile for me. I wish I could stick around and talk more, but I have to go ice my patooti now.

Jon, if swimming becomes my new big thing, there will be speedo action, for sure. If I have to torture myself, I'm gonna spread the misery.

FBC, yeah. Don't have your phone# but shooting you an email now.

Jonathan sounds no more "gay" than any other hairy Papa Bear.

Bring on the speedos and the double-jointed coccyx!

I'm not sure if you're interested, and if not tell me to shove it, but: If you count down from the lowest visible rib on the xray (that is your 12th thoracic vertebra), you will find 4 and 1/2 lumbar vertebrae, or rather 4 regular lumbar vertebrae a "sacralized" 5th vertebra. I'm not your doctor, but by my admittedly limited read over the internets, it appears you do not have a split sacrum. You have a partial 5th lumbar vertebrae. If you sacrum was split into two you would count 5 distinct lumbar vertebrae. You may want to run this by your chiropractor.

Anon, not at all - I'm totally interested. Thanks. One thing that's becoming clear to me is that I need to get to the bottom (pardon the pun) of this structural abnormality and what exactly it is and what my options are. I'm not sure at this point about continuing with the chiropractor (no improvement so far) or going the MD/PT route. Or both. Decisions.

You've had this spine for fifty years, without this kind ofpain, correct?

Why pain now? Why can your body no longer compensate for your structural "abnormality?"

What's changed? What can be changed back? Which changes might be a good idea anyway?

Bones sure show up nicely in imaging.

well that sucks. Here's to a speedy recovery!

Pat, glad to hear our people in the valley are doing a good job!
I would call what you have a "transitional vertebra". There are many normal variants in the spine and I'm not sure it is the cause of your pain, like anonymous above suggested. Back pain is extremely common--in fact it is essentially the reason chiropractors exist. There are many causes of back pain and it can be extremely difficult to pin down the exact cause. I don't deal with back pain patients myself, but I did have a herniated disc at the young age of 16 which required surgery. My bias would be that if the pain doesn't improve in the few weeks the chiro promised, see an MD. Hopefully it is just a strained muscle with a vengeance and will work itself out. For me I've had to be careful to keep my core strengthened, has made a huge difference in keeping such spasms to a minimum. And oddly, I find that cycling has helped strengthen my back a lot.
Hope it improves soon!

lazyeye, thanks. I really appreciate the good information and advice.

I'm probably being too impatient, but I'm not improving, so I'm seeing an MD on Monday. I'll continue with the chiropractor for now, but can't see any reason I shouldn't get an MD's take on this.

Interesting, your comment about how cycling has helped strengthen your back. I don't do any dedicated core work (that will change now), and my time on bike is unusually low these past few months, so maybe a decrease in my core strength is a contributor here.

Probably the kind of thing Anon was getting at with the comment about what's changed and what can be changed back.