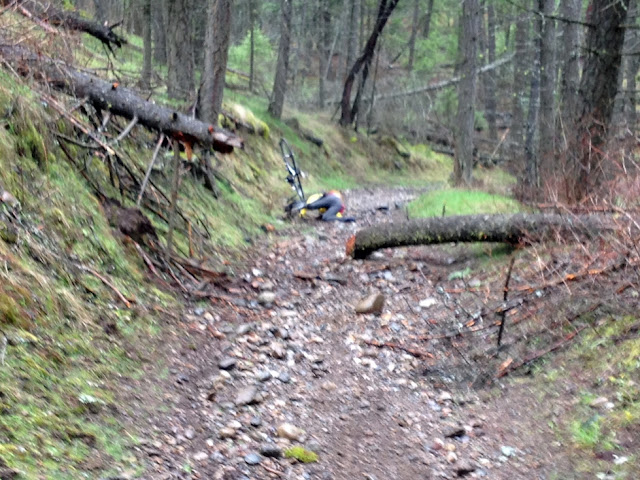 Proving once again, that when it comes to cell phone photography, as well as a multitude of other endeavors in life:
a.)  Timing is everything
b.)  It's better to be lucky than good
c.)  All of the above

I won't go into what this event proves from a cycling perspective, or try to debunk any misinterpretation on your part about what actually just happened.  Nor will I try to explain what we were all doing on this trail in the middle of a road ride, on road bikes.  I think it's better if you just use your imagination.  It's important to let you know that Bill and bike are fine, and I will leave it at that.
Posted by Pat S at 1:14 PM

That is a whole new angle on Bill's ass.

If he was trying to drop in from that mossy rock, he should have had his ass way back over the rear wheel. And he should have kept his hands off the front brake.

Oh, and if he was on some Hetre Legers or whatever they are called, this would never had happened.

That's by far the best pic of Bill's ass yet. Perhaps one of the best pics you'll ever take Pat.

What's funny is that a few minutes later as I chatted with Bill on the ride back into town, he mentioned that he had "slipped" coming down the hill... a bit of an understatement, clearly.

I wish I could credit that particular outcome up to improper tire selection or miscalculated bad-ass move. Unfortunately it was the logical outcome of particularly pathetic and moronic attempt to descend a bit of washed out goat-trail. Had I the wisdom of Pat who walked, or the skills of Justin, John and Joe, then Pat would have missed a photo-op.

Anon, that's precisely what I was alluding to about not wanting to debunk any misinterpretation of the events . . . if an urban legend should begin to develop around Bill's sawing through that tree with his bike, well, far be it from me to discourage that.

I notice the camera was on the fuzzy setting usually reserved for documenting Bigfoot sightings. Excellent choice.

In fact, if you stare at Bill's ass for one minute, two minutes, OK that's enough! Now look up at the indistinct figure on the grassy knoll--what is that?

Everyone's ass will be glassed.

Clark, I know! I see it, too! This photo is for sale, for a price. I think it could push a lot of rags into the hands of Enquiring minds.

GH, once google glasses hit, no one will want to ride with this super nosey blogger ever again. I'm kind of thinking Bill's already there, glasses or not.

There's a chance you are eligible for a complimentary Apple iPhone 7.