On the morning of Thursday, April 25, 2013, I joined up with a group of five bike-obsessed nutjobs, two of whom I'd never even met.  The common purpose that brought the six of us together was a bikepacking traverse through the Colockum and Quilomene wildlife areas over the next four days.  In more familiar terms, this would be a north-to-south tour along the western bank of the Columbia River Gorge, from just south of Wenatchee down to Vantage.  Here's a Google Earth image of the route . . . 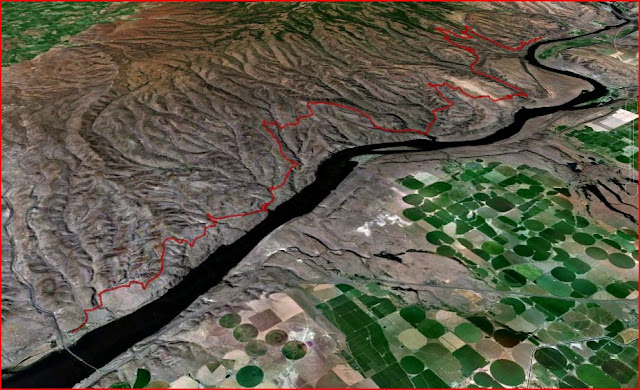 And here's the elevation profile . . .

You may have noticed that the total distance we would be covering is just over 50 miles.  In four days.  Elevation profile notwithstanding, I couldn't imagine, at the outset, how a trip that averaged just 12-13 miles a day could be even moderately challenging.  But I was intrigued by the scenery and the chance to get out and bikepack in some remote areas.  I packed a book, so I would have something to do during all the downtime.  Heh, heh, in 20/20 hindsight, what a fool I feel like, as I type the previous sentence.

The genesis of the trip was some casual conversation with my just-acquainted fellow fatbiker Ward, at the 2nd Annual Northwest Fatbike Meet last October.  At the time, it was just some dreamy brainstormy chat about possible ride/adventure/get-together ideas, as groups of bike freaks are wont to chat about.  Over the winter, Ward began planning in earnest, and by February, he'd sent out an email invite to a short list of folks.  I wasn't yet gonzo bonkers in love with my at-the-time vision of this trip, but interested enough that I committed.  Over the next few weeks, we set the date.

In the meantime, Ward sent out a link to a video he made from footage he shot during a trip covering a part of the route last year.

The effect of the video on me was profound; I went from lukewarm to full-tilt all-in on this trip.

Ward and I had some discussion about managing the size of the group that might be interested in coming along; the trip was not going to be conducive to a large group, but at the same time he wanted people that were really interested to have the opportunity.  The other aspect that had to be somewhat managed was the level of bikepacking and/or wilderness experience in general that people had.  This would not be the proper trip for getting your bikepacking feet wet.

This was Ward's trip, and in light of the considerations above, I had no business "recruiting".  However, I wanted to leak a bit of news, in case there were people in my circles that needed to go.  So I posted Ward's video to my blog and made a coupla other references to the upcoming trip.  A co-worker, Joe, bit.  Hard.  He committed strong and never wavered.  It was good to have someone local to be going with and even better that we worked together; sharing plans and details in the weeks leading up to the trip fueled the anticipation.

The balance of the group that threw down on this adventure was an amazing collection of folks.  Let me do some introducing of the All-Washington All-Star team:

Ward, from the Yakima area, is the mastermind behind this excursion.  Without his planning, it would not been possible, as it involved a knowledge of the area that has been accumulated over years.  In addition to his planning skills, he's an all-around great guy; his enthusiasm is infectious and his generosity is out of this world . . .

Randy, from Stanwood, north of Seattle, is a long-time friend of Ward's, and the two have shared many an outdoor adventure.  Randy is a master shuttle commander (explanation to follow) as well as a trail cuisine magician (trust me when I tell you there was a fair amount of envy at meal time).  It was a pleasure hanging out with this super dude on this trip . . . 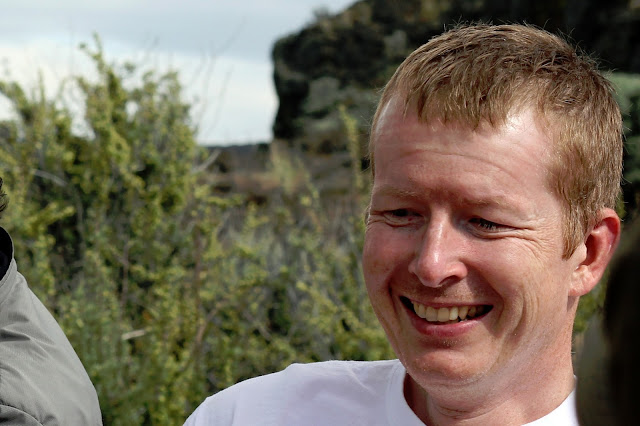 Spokane Joe and I have known each other for a few years and we're well aware of each others' bike passions.  Despite that, this would be the first time that we had ever ridden together.  Reason being, we're in different leagues, meaning, I can't keep up with him.  But this winter, he had a bad skiing accident and tore up a bunch of ligaments in his knee, which drastically changed his plans and outlook for the coming year.  While waiting for surgery (scheduled for next week), he was able to work his knee back into riding shape, and this trip became a worthwhile goal and an outlet for re-focusing his athletic and bike nerd passions, I think.  It was great to hang out with him and finally get that ride in together . . . 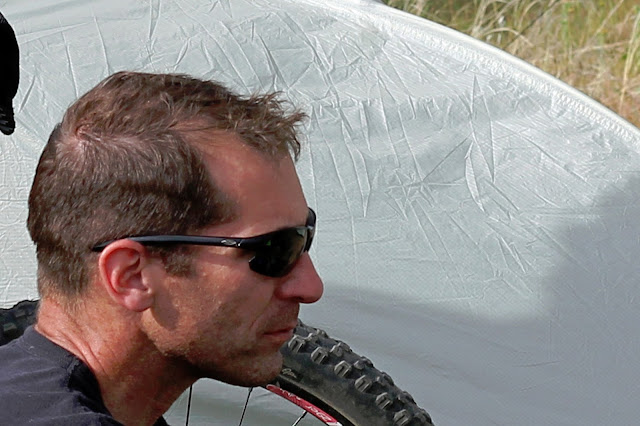 Stu is from the Tri-Cities area and knows Ward because they both hang out at the White Pass area in the winter.  Stu is a ski patroller up there and it was a comfort to have his outdoor emergency medical skills along for the ride.  Stu is your total can-do guy and his expertise in packing a lightweight gear setup had me consumed with jealousy on many a climb.  It was great fun getting to know Stu and hanging out with him on this journey . . . 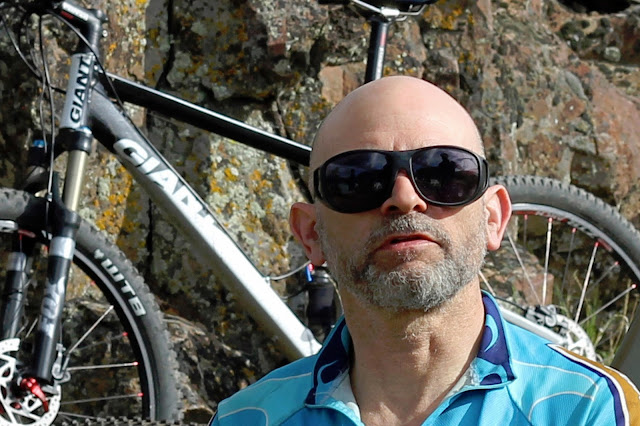 Chris is from Wenatchee, and a friend of Randy's.  He's a long time mountain biker and has done stints in bike shops.  He's also quite involved with the Central Washington chapter of the Evergreen Bicycle Alliance. His greatest assets though, may be his "just in time" philosophy regarding bike maintenance and his totally laid back attitude and not only willingness, but enjoyment, of rolling with the punches.  It was a pleasure sharing this adventure with him . . . 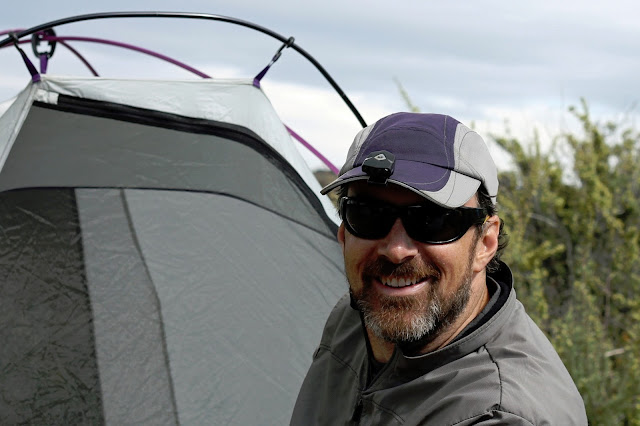 Megan and Steve, a.k.a. the "Beer Fairies", are from the Ellensburg area and although they weren't able to make the whole trip, they joined up with us on the trail, camped with us the last night, and we all rode out to Vantage together.  They have a great knowledge of the area, and they're shuttle commanders, to boot.  They're friends of Ward, and now friends of ours, as well.  Flat out fantastic people . . . 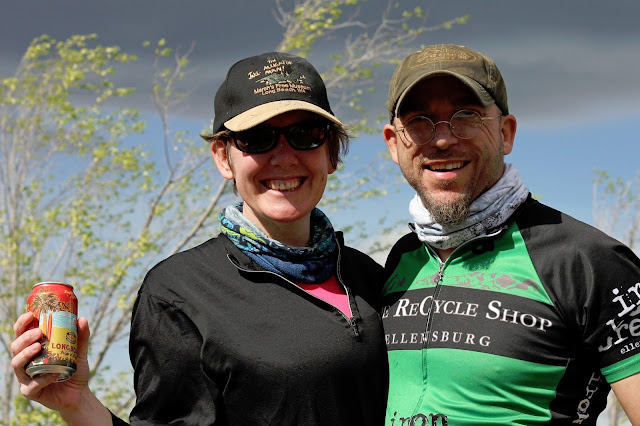 So with that, I conclude my introduction.  On to the telling of the actual story, then, which will be done over the course of four posts, each covering one day of the trip.  In the meantime, here are some preview pics:

...I couldn't imagine, at the outset, how a trip that averaged just 12-13 miles a day could be even moderately challenging... I packed a book, so I would have something to do during all the downtime...

DUDE... I'm laughing, but... I'm sorry? LOL! We actually passed on the whole trip because as much as we loved the idea of it, we felt we needed to get our bikepacking chops dialed in better before taking on a Beast Of These Proportions.

I'm not going to give anything away - However, this was a real ride, real challenge, and a whole bunch of fun. I have been thinking about it non stop since we arrived back at Pat's truck. I will do several more trips like this in my life.

No question about it Pat, you are awesome!

Have to admit, at several points on this trip I had feelings of "what in the heck have we got ourselves into this time" and "I'm never doing this again". Luckily, those emotions were balanced out with just as strong of positive feelings, incredible and diverse beauty of a unique Central Washington area and environment, and truly great companionship.

I was super glad and a bit relieved as we finished this one up, but a part of me already misses being out there with all of you. Thanks everyone! Awesome trip!!

Joe- like you I don't want to steal anyone's thunder and am anxiously awaiting Pat's next chapters. But I'm also glad to get to ride with you... this once. I'm very much assuming you'll be a speck in the distance once that knee is healed up. :)

Mike, I wouldn't wish the pain upon you, but I would totally wish the experience upon you. It's been the weirdest contradiction, I know.

Meg, no one could explain it to me beforehand and I'm 100% positive I can't explain it to anyone who hasn't been there, try as I might. It's just one of those things/places you just have to experience to understand. I get it now.

Joe, maybe the smartest thing I did on this whole trip was to plan to take the day after (today) off. I literally did nothing all day except process thoughts and images. This was the real deal.

Ward, you and I are on the same page, brother. I had so many thoughts about how I am NEVER willingly putting myself through this again. Getting to Whiskey Dick Bay was, like, salvation. And at the same time, the whole thing just has my soul supercharged. I'm probably gonna be jonesin' to go back, if I'm not already, deep down. Damnit to hell.

Every bike tour I have done has given me this feeling of true freedom and the possibilities simply by riding your bike. Gonna need to start looking at other routes to link together the entire state by RBV

That elevation profile... Jeebus! I don't think I could mount a small chainring small enough for that. Wow.

The weather looked good, though. I bet you had cold nights!

Pat, I'm in withdrawl; constantly checking your blog for the next installments of the trip story.
And please give us an update on Joe's surgery. Amazing that every epic adventure needs just the right amount of tension and ANXIETY, and Ward gave us the perfect recipe. Thanks folks.
Stu

Hi, looks like an awesome ride. Do you happen to have route info or can you send me the gps or .kml file from google earth?

eToro is the most recommended forex trading platform for rookie and established traders.