Why is this thought bike-related? Because at least 90% of the  pictures I take are because of and end up on this blog.  Not that there isn't more to life, but extended-family-wise, we have some prolific photogs, so there's no real motivation for me to jump into that fray.  Although it would cool to be able to provide Patty with some higher-quality art of our immediate family. So there's also that.

I'm inspired by pictures like these (in no particular order):

And there are others . . . Hank, Rory, Andre, Vik, to name a few . . . all have given me valuable advice and lots of fine examples of their work to look at.

I'll never be as good as any of them, but they give me something to aspire to.  I think the 80-20 rule is in effect here . . . with some moderate effort I suspect can improve my images drastically.  I don't need to be bomber, just better.

So the first step in my quest is/was to buy a way-more-capable point-and-shoot, which turned out to be the Canon S95, which is at rock-bottom pricing right now because the newer faster S100 is out. The S95 is basically a highly-acclaimed cam that has/had a MSRP of $400 and can now be had for around $300. I could have scraped into one at $290 online, but one of our local retailers, Huppins, sale-priced them at $299 and even with tax added in, it was close enough that it's just something I wanted to buy local, in that tug-of-war of internet vs local.  As far as DSLR's goes, I'm just not at that stage yet for a coupla reasons:

1. Technically, they're a bit beyond where I'm at and have the ability to grasp and learn right now, given my schedule constraints.  Maybe, time and interest allowing, I'll progress there in due time.

2. Bike-wise, I'm still hung up on compactness and portability. I've thought long and hard with as wide open a mind as I could manage, and I just can't get to the place where I can envision lugging around and protecting a much more expensive DSLR for the majority of what I do. 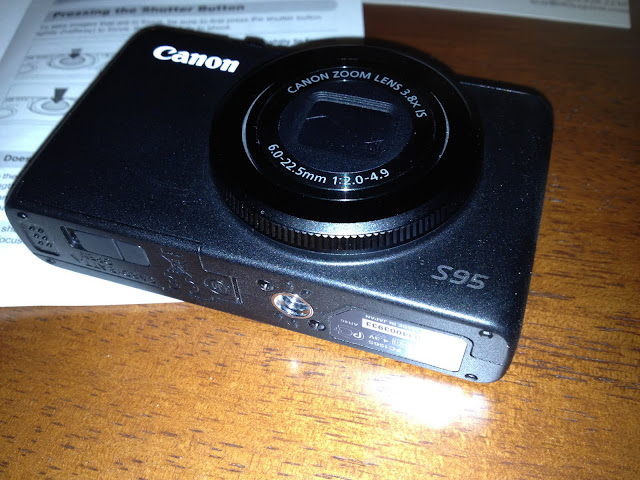 And I'm signed up for some instruction, because you can't learn every damn thing online . . .

So hopefully, there will be some better photos coming your way soon. And if not, hopefully you'll understand that I spent a spent a buncha money on something that didn't pan out and not pour salt in the wound. Although, why would I expect you to change, knowing you as I do.
Posted by Pat S at 12:12 AM

awesome! the best thing for me i found is to just go out and take pictures with it. the s90/s95 make the adjusting the fstop and other weird camera things much easier then on other cameras i've used due to the dual rings. I'll be interested to see how yous like it...

Great choice. I think you'll love that camera. I came very close to buying one about a year ago, but ended up waiting for the X100 to come out, which ended up disappointing me for the price I paid.

With F2.0, it's a great little camera for low light and detail shots.

I strongly second what Rory said, just go out and take pictures.

And thanks for including me in the list of decent photographers. It all comes down to taking a boat load of photos.

Very good choice, like most of, if not all Canon PowerShots. If you didn't already know, the CHDK (Canon Hack Development Kit, http://chdk.wikia.com/wiki/CHDK) is pretty outstanding addition for Canon P&S cameras. I highly recommend to give it a try.

Thanks for the comments, guys. I'm at the point (i.e. pretty lost) where I really appreciate all the help I can get.

Get professional trading signals delivered to your cell phone daily.

Start following our trades NOW & make up to 270% per day.