Patty was out of town this weekend, which apparently gave me license to wreak havoc in the shop.  This post is the follow-up and conclusion to Part I.  I'll pretty much let the pictures tell the story. 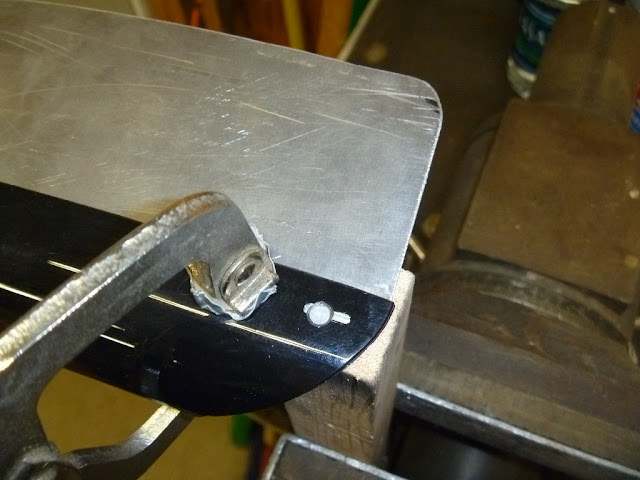 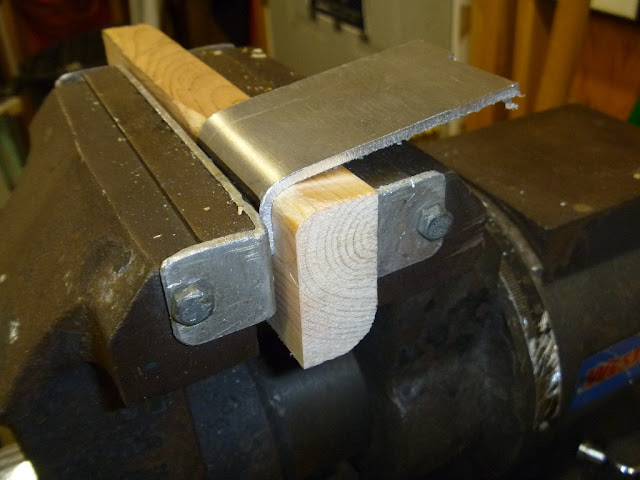 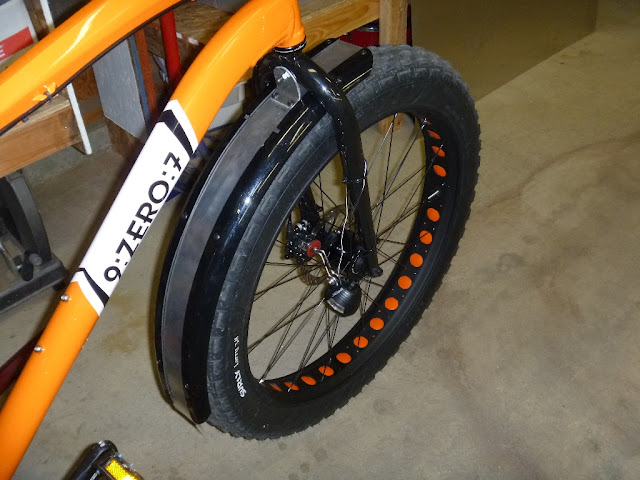 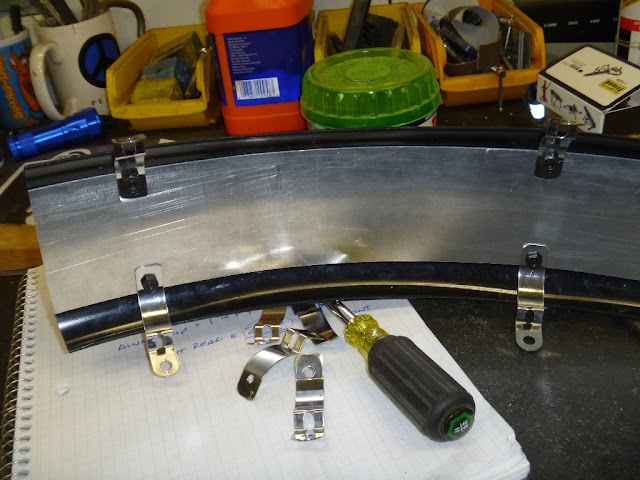 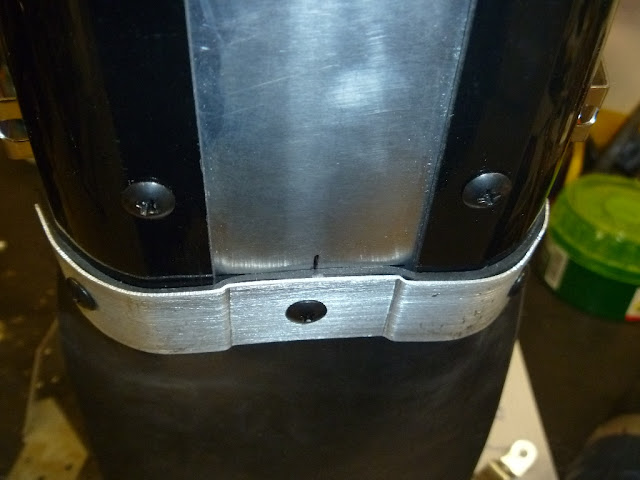 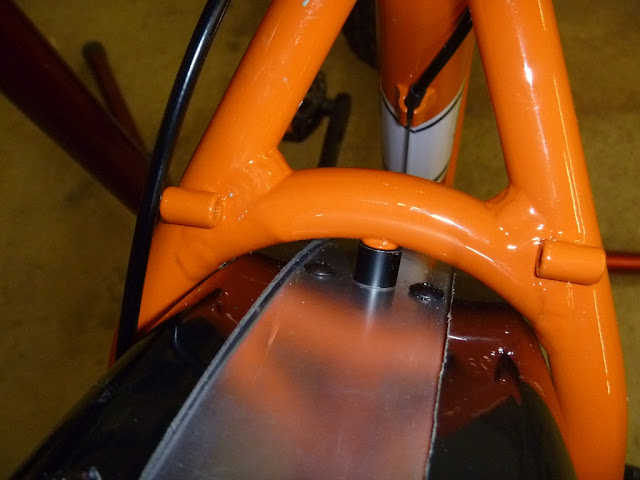 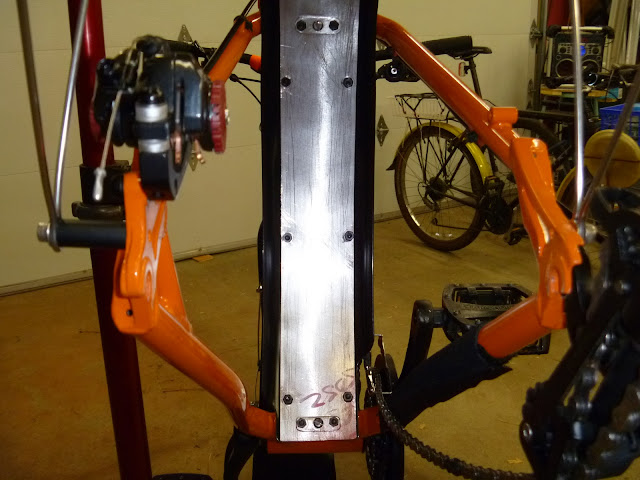 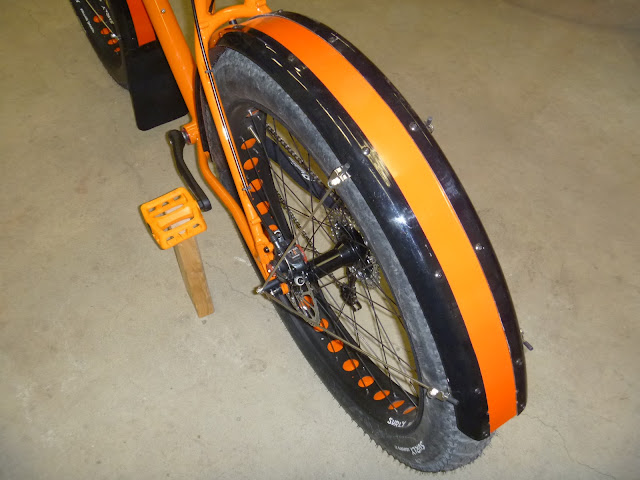 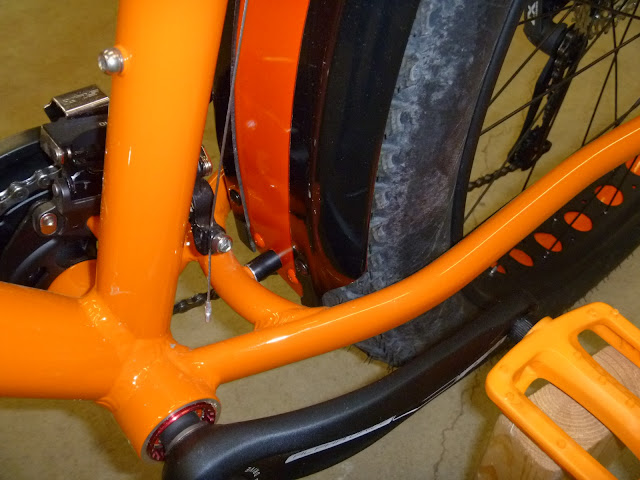 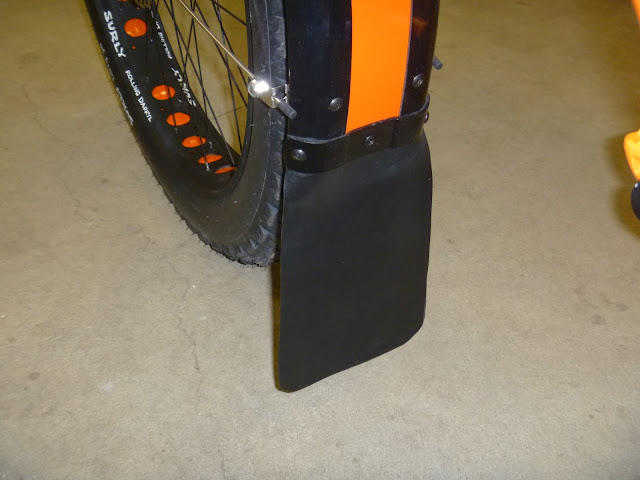 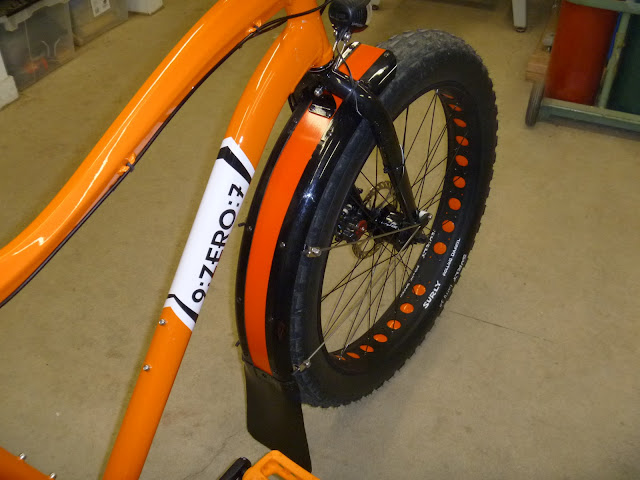 All up, the cost was probably the better part of a Benjamin and everything added up to 2-1/2 pounds worth of fenders. They're a little floppy, but not as bad as I thought they might be. They won't be on the bike all the time - 3 screws in the front and 4 in the back is all it takes to get them on and off - but it will sure be good to have them in some conditions. Fat tires can kick up a ton of gunk. The mismatch on the shades of orange kind of bugs me - the pictures don't do it justice, but the fenders kind of clash with the frame. I had assumed that any different oranges would pretty much work together, so I didn't sweat the shade, but I think it's gonna bug me to the point that I'll need to do something about it at some point. Later. For now, it's time to go get dirty. So where's all the mud and snow?
Posted by Pat S at 10:13 PM

Very very nice Pat! I had exactly same idea in my mind, with the only difference that I would have painted the center red to match the black/red theme of my 907.

As the concept changed my fenders will be completely red (excluding the mounting hardware). My patience is tested as I have to wait 7 days for proper drying of the paint...

Thanks Toni. I'm anxious to see pics of yours once you get them mounted.

Hey, the way you made the step is clever. I have not used that method. Did you use an etching primer on the al?

Jesus Pat. Incredible work. I can't wait to see them.

That explains why you were "staying in" on Sat night. I should've known...
THose are rad. You're kind of touched though.

How about orange refective tape for the centers of the fenders? Then if they don't match, there's a functional reason ;) Check out this guy's lead on where he's getting his:

Nice work. It all looks cleanly put-together. Whenever I am concerned about not having a perfect match in colors, but I still want colors that look good together, I just pick a complementary color in stead. In this case, I probably would have shot for royal blue.

All that effort will ensure that it is a dry and non-sloppy winter, and I thank you for that!

Ward, I just hit it with some sandpaper and then cleaned it off with lacquer thinner and shot it with a thin coat of paint. If I like the fenders enough, I'll probably strip the paint and have them powder coated.

Thanks Jon, see ya soon.

Tom, lots of guys are doing just what you suggested. I didn't this first time around because of cost and because some people complain about it being *too reflective*. I know that's probably a hard sell for the owner of the original Reflect-O-Bike. :-) I might eventually give it a try if I end up doing quite a bit of street riding. But if I had to guess at this five minutes, I'd say this bike will be used mostly for trail riding. But until we have actual snow, it's all conjecture.

Andrew, you're probably right about the complementary color. Although I'm not sure I'm feeling the love for blue.

My first comment from Pajan! Right on, this blog is going global. Hope things are good with you guys, Patrick. This place ain't the same without ya.

The goal of the owners is to continue to expand the line of beach cruisers that Beachbikes.net carries while keeping prices down.
bike basket

Thank you jachmilli, for this valuable bit of spam. I will be sure to go there and buy one of whatever you are selling right now.

Get professional trading signals sent to your mobile phone daily.

Start following our signals NOW and profit up to 270% a day.