Apparently, I am compelled to learn to wheelie {sigh}.  I sort of dread what I'm getting myself into, but I've decided that I need to build a wheelie "trainer".  I spent part of this morning running around, gathering parts.  Shit, I can't believe I'm spending precious time on this.  The inner call is not to be denied, though.  Believe me, I have tried.  Stay tuned, as this sad story unfolds. 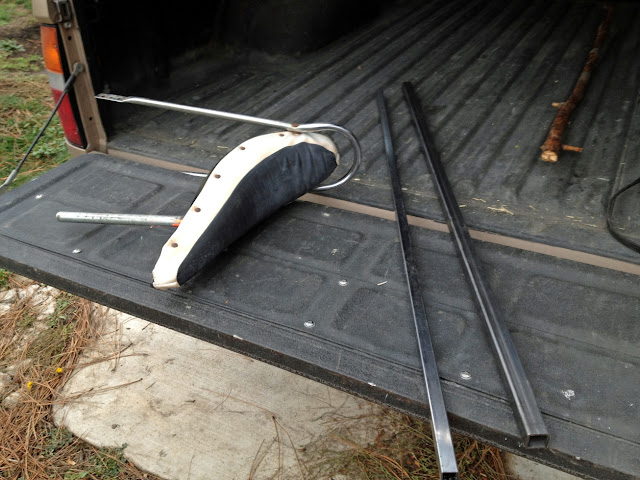 For just a split second, I thought my work had already been done for me, as I pulled up to Pedals2People.  But upon further analysis, I decided that it would not make a good wheelie trainer (according to my hack sensibilities that have resulted from way too many hours theorizing about the ideal form).  It's still somehow highly aesthetically pleasing to me, though.  After much thought on center-of-gravity matters, I have developed a banana seat fetish, and this is a remarkable implementation. 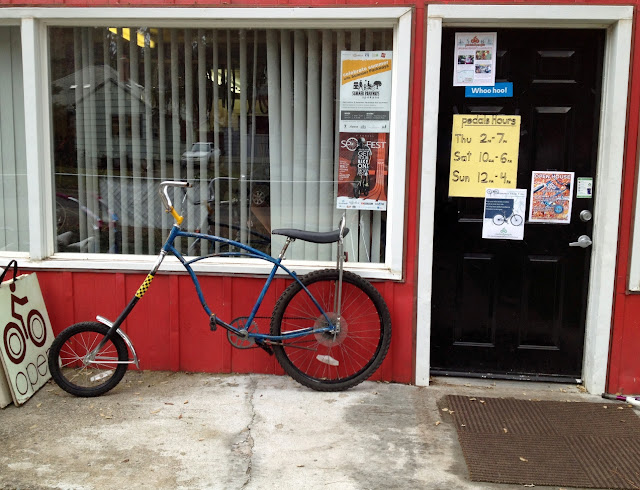 I was glad to have the opportunity to douse the flames of the wheelie dumpster fire in my brain with some high-end beer at the MTH.  I met my buddy Dave Nelson (of NW Fatbike Convention fame) there to talk a bunch of bike shit over beers and then three more of his buddies joined us and it started getting really deep.  I had to bail, lest I end up throwing the towel in on the rest of the day, tempting as it was.  Drinking beer at 1:00 on a Saturday afternoon is one of the finer things in life though, I will say. 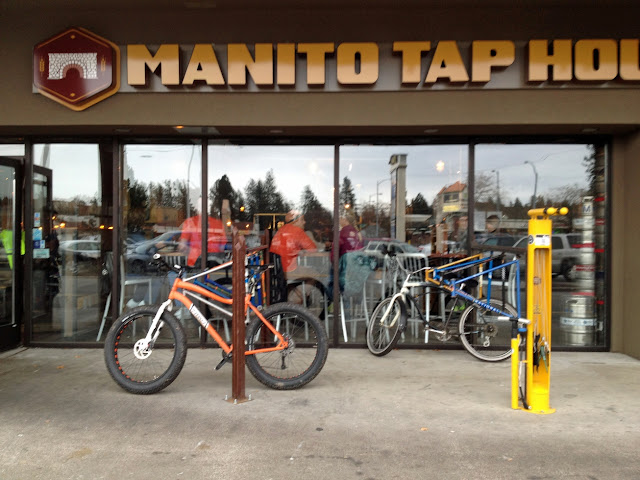 Back at home, I ruminated, briefly, on how today would have been a fantastic opportunity to take some turns on the new turn, but there was more pressing bike business, I guess.  (A wheelie machine?  Really??)  A couple of glances and one photo were the extent of the attention paid to it.  What a crime. 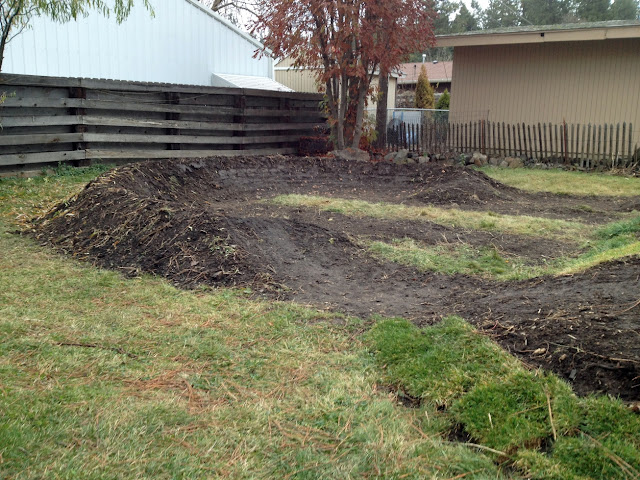 I've been really digging my weekend rides this fall and they are also really key to the weight loss thing, since I fly a desk all week and with the short days, it's hard to get much exercise during the week.  So it was good to be able to head out to Riverside.  My intent was to gps my way around one lap of the 24 Hour Course, in accordance with the Master Plan.


I did feel the urge to stop one time to feed my pornography addiction, just so you know I am not without my flaws and vices, in case your were starting to idolize me. 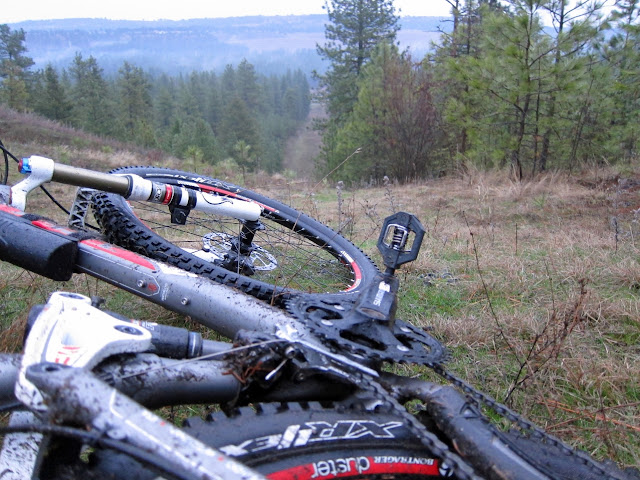 Having started at a little after 3:00, I knew I'd be pushing it, darkness-wise. I brought my fancy new hi-zoot light along (that I need to do a dedicated post on, at some point).  Turned out to be the right call. 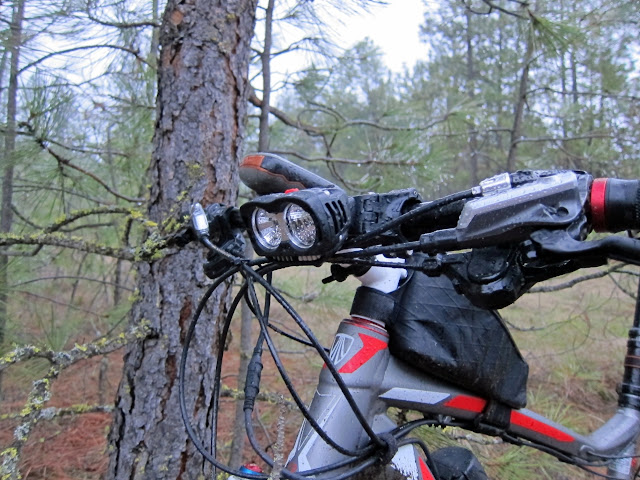 I don't have any more pics, but it had been raining since I started and so it was getting pretty sloppy and also quite dark. There were military exercises going on in the park and it was apparent that it was an overnight deal, as there was a big encampment with tents and a bonfire and lights and stuff, and a lot of soldiers lurking around on the trails with rifles, and well, as much as I wanted to achieve my goal, I just didn't feel like I belonged out there at that point. According to park rules, I wasn't supposed to be out there after dark at all, and I didn't feel like getting anyone excited.  I hopped on the CT and soft-pedaled it back to the truck.  Another day, then.  It was a highly enjoyable and therefore successful outing, nonetheless.

I've saved the very biggest news for last, though:

Oh wait, I'm not.  I did sign up, and I wanted to be involved in just a minor way, so that I could interact with some people I admire that are posting up some useful and creative stuff there, and this was to have been the announcement of my coming out. But then I went and tried to get my fb self spruced up for public display and I just became so flipping pissed about how huge and powerful and controlling and devious and insidious and so "in your business" they are. They don't even try to hide it. Spare me. Forever. Geez. With no offense to anyone who fb's, honestly, because there's a certain amount of good they do in terms of keeping people that should be in touch, in touch. I get it.  But personally, I find the whole thing just way too hard to stomach.

That out of the way, if I *were* your fb friend, I'd point you towards this.

I've known about Strava, but have never used it. I've never had anything for or against it. I know some cool and down-to-earth people that have had some fun with it.  But apparently, there is a fanatical sub-minority of Strava users, now labelled as "stravassholes" who have crossed the line and are so consumed with competing in virtual space that they are ruining the real riding experience for themselves and, more importantly, others.

Take it for what you will, would-be fb friend. That is all for now. Hope you're having a good weekend. Now stop staring at your monitor and go ride your bike.
Posted by Pat S at 10:42 PM

Speaking of weight loss, if you're not using those 2 water-bottle-cage bolts, you can replace them with nylon ones and save about 6 grams for less than $0.25.
- Ventura

How late it Ace open on Sunday?

New Diet Taps into Revolutionary Idea to Help Dieters Get Rid Of 23 Pounds within Only 21 Days!

Are you looking for free Google+ Circles?
Did you know you can get these AUTOMATICALLY AND ABSOLUTELY FOR FREE by registering on Like 4 Like?

If you want your ex-girlfriend or ex-boyfriend to come crawling back to you on their knees (no matter why you broke up) you gotta watch this video
right away...