Or, 'Bout Damn Time!  Or, The Times, They Are A Changin'.  The possibilities are pretty endless . . . there are a a thousand phrases built around the word "time" and at least that many words that rhyme with it.

If only the pedals were as rad as the word. 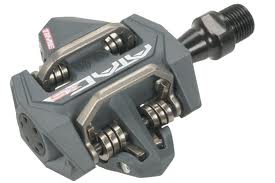 Unfortunately, they are not.  It's not that they don't work well. They do.  But they are made in France, and so naturally, they are difficult by nature - expensive as hell and hard to get rebuild kits for.  And proud of it.

I accidentally "standardized" on them ten or so years ago and I've been looking for a way out for the last couple.  Trouble is, once you have three or four bikes equipped with a certain brand of pedal and then have those brand-specific cleats on more pairs of shoes than you are comfortable divulging over the internet, you are looking at some serious coin to convert over to a different brand.

I always seem to have at least one pair that is squeaking or grinding and so it was again, the weekend before last, when I went to swap a set onto the fatbike, only to find out that the left one felt like the bearing races were lined with sandpaper.  I happened to be down at REI that same afternoon for other purposes, and thought I'd lolly through the pedal section and see what a set of Times would set me back.  They had one model in stock, and $179 dollars is the answer.  Holy living hell.

But since I was in the pedal section anyways, I chanced a gaze in the direction of the Crank Brothers offerings, and whadya know . . . Candy Ones were being closed out for $39 a pair.  And they came with cleats!  After a few blazing moments of mind-numbing mathematical calculations, I saw the light, loaded up with a quantity sufficient to convert my entire fleet, and was out the door. 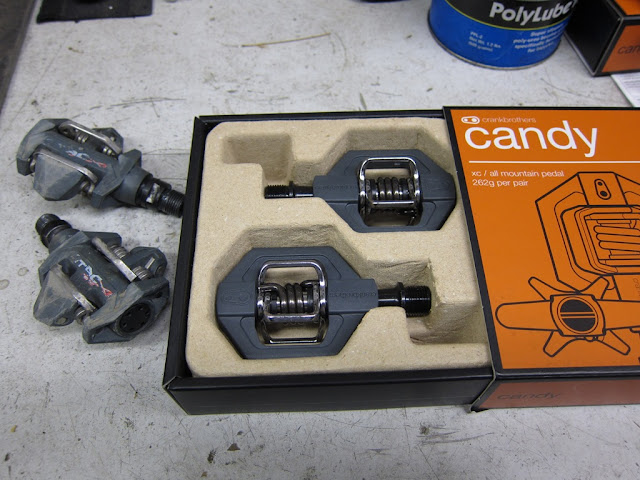 I now have pedals that I can get rebuild parts for and that clear mud and snow as well as the Times and that won't cost me an arm and a leg if I want another set. The only thing on the other side of the ledger is that after having spent more than a week riding them on various bikes and in various shoes, I do have to admit that the Times are a little easier to get in and out of, but that is all.

I can hear the French responding, from across the pond:  "But of course they are, they are superior in every way!" (proclaimed with the proper french accent and syllabic emphasis, of course. Feel free to take a couple of minutes of you-time and  do your best impression, out loud for your own personal entertainment. Try not to get carried away and make a fool out of yourself, though.)

Anyway, I've gone on longer than intended, as usual. Bottom line though, is that I don't know if it's always true that change is good, but in this case it surely is.  I feel like celebrating with a plate of french toast.
Posted by Pat S at 11:50 PM

" little easier to get in and out of"

Give 'em two weeks. You take the edge off that brass cleat and their smooth as butta.
Probably ten pairs of Crank Brothers in the garage, between three riding adults in this household. Some of which are pushing a decade of hard riding and still rolling.
I'm particularly fond of the Mallets, clip in or hop in in Chacos. Don't matter.

Every bike in our household runs on Crank Brothers pedals (12 bikes and counting...). Couldn't be happier, although I do find the cleats wear out pretty quickly. I've found that sometimes, if you watch the sale flyers, it's cheaper to buy new pedals than it is to buy re-build kits. Either way, love the pedals.

Good choice on your part!

The reason the crank bros. pedals are so cheap is they spend all their money on the warranty department instead of QC.

You should have run this post through a translator and published the whole thing in French. ;)

Back on topic, I have a single pair of ancient, beat to hell, Crank Bros. Smarty pedals. These were the cheapest of the cheap. Not rebuildable. Horrid reviews. Mine are still going strong and the bearings are smoooooooth.

I love all my eggbeaters and Candy's. Only beef I could come up with is the left pedal retention nut isn't reverse threaded like most pedals so if it comes loose its coming off but I've never had a problem with it. Any yes they are very easy to rebuild.

Do you want to sell your Time pedals? I need a couple pairs for my bikes. if so email at michaelrobertsullivan@gmail.com.

Welcome to the Crank side - you will love them!

Lots of CB love, then. Sweet. With Adam being the only dissenting voice. Half-dissenting, I guess. 'Cause a good warranty department's a good thing, right?

Thanks for the comments, guys. Definitely looking forward to putting some miles on these dudes and finding out for myself.

I've been running my ATAC's for quite a few years now. The problem has been finding replacement cleats. Will cost almost as much as a new set of these pedals. I absolutely love the ATAC's though and haven't had any problems with them aside from sourcing new cleats.