Not What I Expected From Myself

The 2009 Midnight Century Spokane is in the books. Pretty epic stuff, this ride.

I left my house at 20 'til and coasted down the hill. A few of the faces I recognized among the group gathered at the Elk: John, Glen, Tom from Two Wheel Transit, David and Dan from NDBS. I counted 18 riders in all. The diversity of bikes was pretty amazing - touring, cross, rigid MTB, front-suspended MTB. Steel, alum, carbon. Skinny slicks, fat knobbies. No rules here. The group was pretty quiet as we rolled out - the sobering thought of several hours of hard work ahead was on everybody's mind, I guess.

Cruising through downtown, we surprised and entertained buzzed Saturday-night revelers. 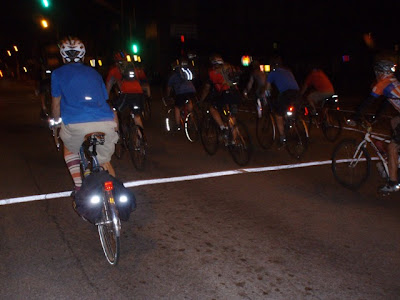 The ride out to stateline was fast and flat and broke the large group into a few smaller ones. 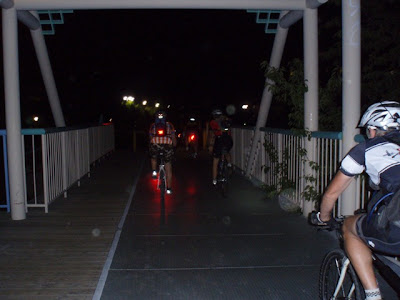 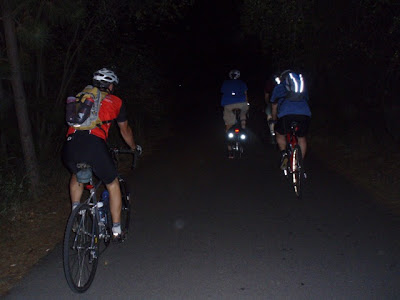 The turn south on Idaho road put us into the hills and dirt. I hadn't been feeling right since the ride started. Now I was really struggling. I settled in with a group that included Dan, Theo (Cycle Sports owner), Noah and another rider, whose name I didn't get. Super nice guys. 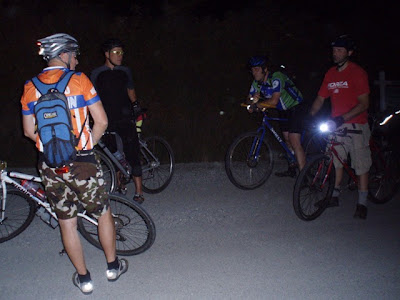 They would have surely done their best to pull me along, but it was clear to me that I was toast. As they turned off of Dishman-Mica on Madison to begin the long climb up Sands/Bruna, I pulled the plug and continued on toward town. Strangely, it was the best part of my ride - downhill with a warm tailwind and then cruising solo through the east central neighborhood and up the south hill in the wee hours.

Bailing out was hard, but it was the right call. My next chance to cut out would have been the Palouse Hwy and based on how I felt by the time I got home, I'd have been in big trouble.

My total round trip was a little over 60 miles. I'm not sure what went wrong. I'd done pre-ride loops of this course in 50 and 60 mile increments over the last couple of weeks in mostly 90+ temps. I really thought that nighttime coolness and adrenaline would kick in and that I would make it, one way or another.

But I started out feeling like I as sleep-walking. I kept yawning. I thought that if I kept riding, I'd eventualy start to feel better and settle into a zone. But it just got worse. I'd left all my drive and my appetite for pain at home. Maybe I went into it too depleted from the previous work week. Maybe the stress of doing a ride that hard at an hour so contrary to your body clock is better left for younger guys. Maybe I just flat didn't have enough miles under my belt. I'm not sure. I have some time to think about it.

Disappointed? Oh yeah. Glad that I gave it a shot? You bet. Try again next year? Not sure.

Hats off to everyone who showed up for the ride. Congrats to all who finished and big props to Tom for his phenomenal ride. Check this out.
Posted by Pat S at 7:03 PM

60 miles? I think you can still count that as "riding the midnight century". It was 60 miles more than 99.9% of the rest of us did Saturday night.

I agree. You deserve more credit than you're giving yourself.