What A Royal Newb I Am

One of the great things about this life we live is that you are free to throw yourself into something totally new and make a fool out of yourself at any stage. Take me, for instance. I'm over halfway through, and this weekend I lost my bike camping virginity. I hope that I still have the desire to bust out of my comfort zone way late into my life, because that's where all the fun is and I don't see why young folks should have it all to themselves or why you should ever stop trying new stuff.

My first sub-24 hour overnight bike camping trip (S24O, for short) is in the bag. It was the John&John&Pat&Patrick show. Every time anyone said "John" or "Pat", half the group would turn around.

I hate getting all serious, but I need to, just for a minute. Our destination was Badger Lake. It's a spot and a route that John developed from scratch and has refined over time. Like all the best stuff, it didn't fall out of the sky. It came about as a result of John getting on his bike with some gear and a half-assed plan and some faith and ending up as the only guy with a bike and a tent in an RV park full of generators and satellite dishes, and having a local whipser in the ear of this guy who stood out like a sore thumb about a spot that might be more along the lines of what he was looking for. I can't speak for him, but my sense is that it panned out way better than anything he could have imagined. And so John, being who he is, would naturally want to share this sweet bike find with other bikey people who would appreciate it, but not shout about it. I felt privileged to be invited. Okay, enough with the sappy shit.

Here are the Johns, as we head out the Columbia Plateau Trail . . . 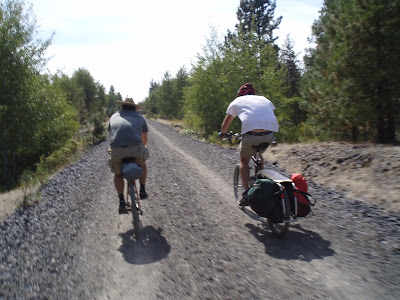 John, John and Patrick, peeling off the beaten path. The notion of a "closed road" is ridiculous, when you think about it . . . 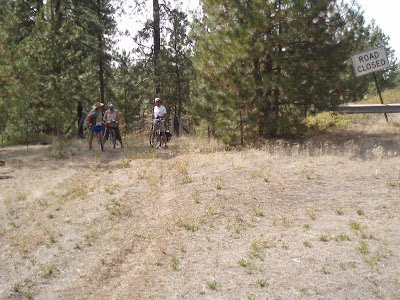 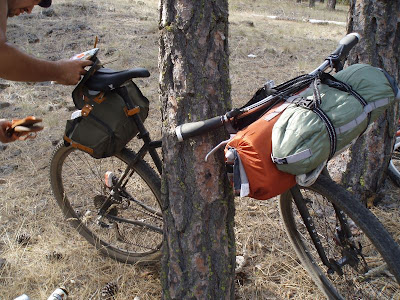 The other John, my fellow newb, brought his Xtracycle and 4/5 of his worldly possessions. Because he could. 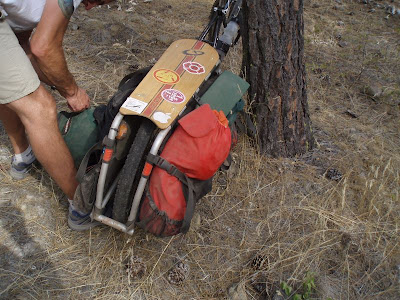 I would love to cast the first stone, except for the fact that I brought panniers packed to the gills. I was ready for a 7-to-10 day stay. In comfort. Dork squared. 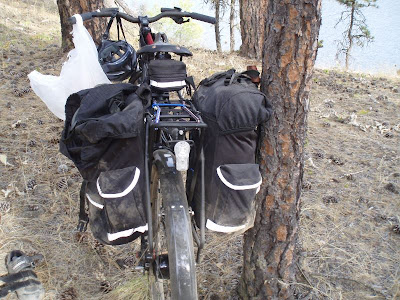 You know what? Although we would do things differently, it didn't really matter. What did, was the pot at the end of rainbow. 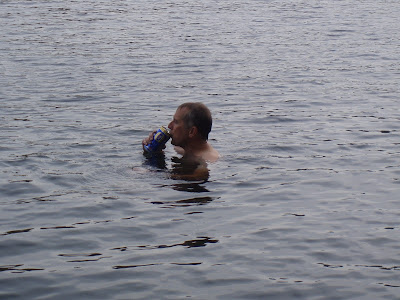 We discovered that if you blow up your spare tube and double it up and stick it under your butt, you have just enough flotation to keep your head and your beer from going under. 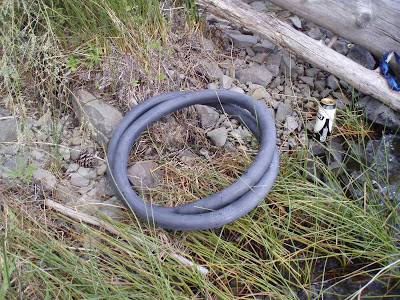 These next three pics pretty much speak for themselves . . . 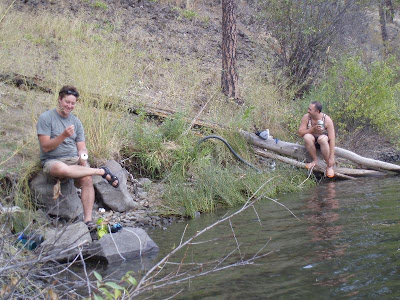 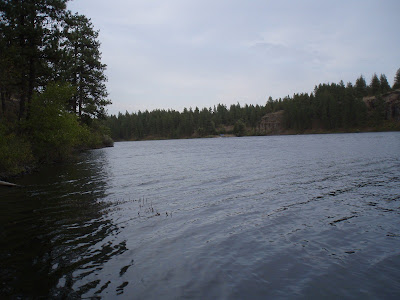 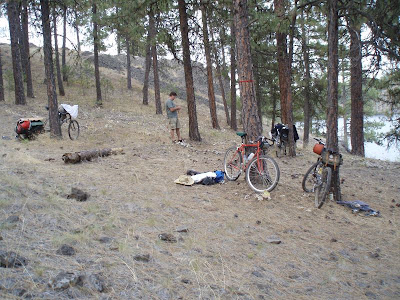 You know all that bullshit about how fast I am with my hammock? As John was tying the last knot, I was still figuring out where to set mine up. 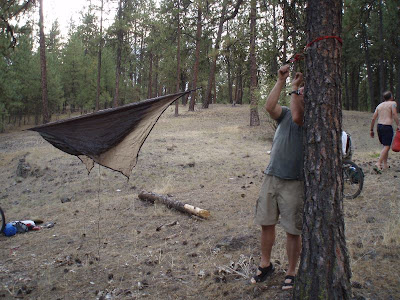 But what he didn't know was that I had technology on my side, which meant that I would be way more comfortabler than he was. 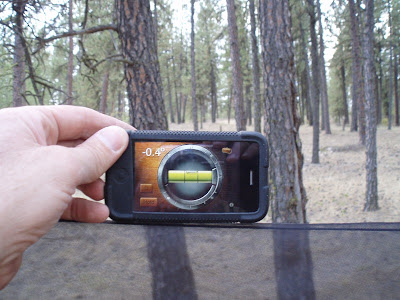 Meanwhile, the other John had been making a lot better use of his time prior to the trip and was setting up his own hammock with salvaged scraps of material and was making me look like even more of a fool for spending all that money. 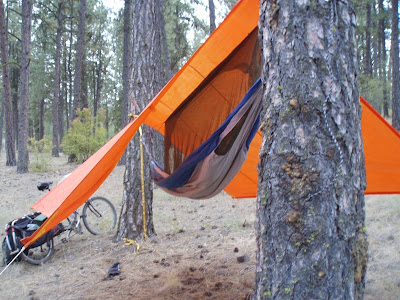 Insanely confident that we each had the best solution, we relaxed for the evening meal. (Patrick, by the way, is the only one who doesn't buy into this hammock nonsense.) 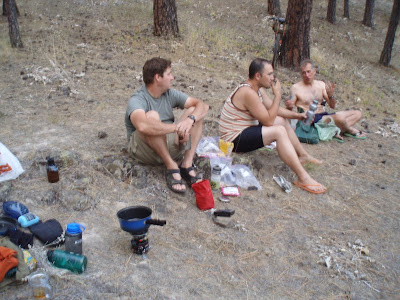 Finally it was time to turn in. I had all my shit hanging off the ridgeline, where I could reach it, in the middle of the night. My plan was beautiful and I had everything I needed should a blizzard develop and I be forced to spend several days and nights in my hammock. 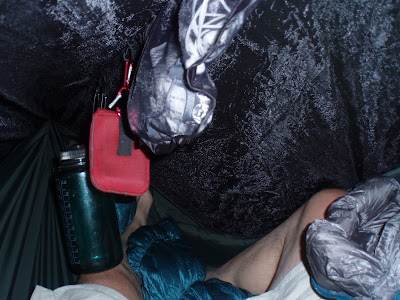 Let me tell you, there was a helluva lotta tossing and turning and trying to get comfortable and pulling my sleeping bag out of the crack of my ass and then the whole hammock would rotate and the bug mesh was on the side instead of the top which gave me plenty of time to look at all the crap hanging off the ridgeline and I can tell you here and now that I understand hammocks about as well as I understand women, which is not at all and then "WHAM!". Sometime between maybe midnight and 4 am (who really knows), the rigging that I put my heart and soul into let go of the tree and slammed me against the earth. How rude. I battled my way out of the fabric prison, strung the SOB back up, tied a coupla extra knots and tried my best to go back to sleep.

Many years ago I raced stock cars and one night I did something really stupid and caused a crash. One of the veteran drivers came up to me afterwards. There was a lot more vitriol involved, but the jist of it was this:

Do you know you just did?
Yup.
Ever going to do it again?
Nope.

Years later he would tell the story over and over, because at least "I got it" and most guys never would. So at least I have that much going for me.

The weather was not totally kind, but we made it into Cheney for breakfast, albeit a little damp. 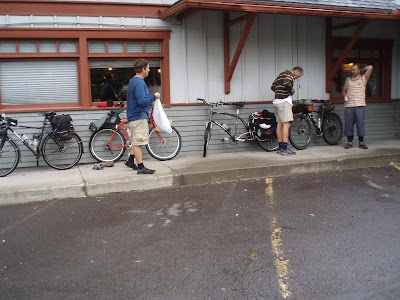 Here's the new, "improved" Fish Lake Trail. They were hauling equipment in as we were sitting there, so it looks like they are paving this week. 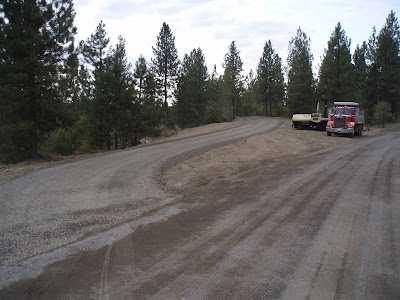 When I got back, I weighed my bags - 21 lbs. Holy shit. And that was on the way back, after shedding a bunch of the weight that I hauled out. Insanity, but it's a place to start. 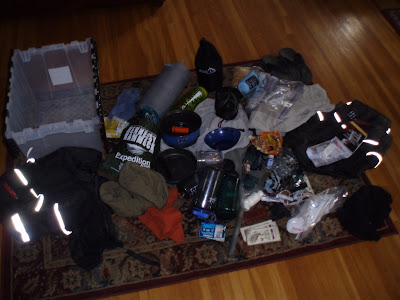 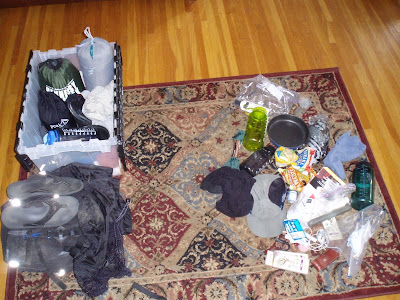 I guess if I were just wanting to check it out, this would have been satisfying enough. But I'm afraid that I'm in deep enough that I need to have the experience of going solo, because as grateful as I am for the intro, I'll never really "get it" without some self-reliant experience. Maybe someday I can contribute something half as great at Badger.
Posted by Pat S at 8:34 PM

You may have been a royal newb, but it sounded like a royal good time and that was a great post.

It looks a lot like Patrick's setup, which looks light. I have no basis for anything though, since I haven't pulled an s24O before, though I hope to before the year is out. Great post.

I agree with Jacque, looks like you guys had a pretty fun overnighter at Badger. I definitely want to join in the S24O fun down the road, but I still need to work on my lightweight camping gear. Maybe by next summer...

Pat: great write up. Thanks for coming. Next up; Hunters!

Spare tubes as flotation devices, beer, and a 4:00 am gravity check.

What a fun time. Thanks for the great read, Pat.

Thanks for the comments, guys. Yeah, I had a blast. Can't stop daydreaming about all the stuff I wanna try with my setup. S24O's are a gearhead's wet dream.

Chihweenie, Kent definitely does it right. Although that kind of minimalist gear in the hands of a fool like me might result in a frozen corpse. I've come face-to-ground with the fact that having the gear and knowing how to use it are two different things!