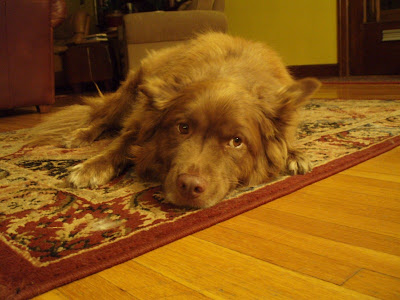 She came into this life as a runt on a farm. She hung out by herself and never got the chance to properly socialize and then she went to what we think was a pretty abusive environment. There was a Russian mail-order bride involved. I am not making this up. Patty and I adopted her out of that when she was two. Even though we knew better, we thought we could love her back to normal, but her first coupla years did some irreversible stuff and I don't like to lie to my dog, so I've had to explain to her that she's brain damaged. The way she looks at me lets me know that she understands. It's just a fraction of a hollow-eyed second and then it's "whatever, dumb human . . . game on, can't we just get on with what's truly important": her one and only focus in her sad dog life is to chase what I throw and bring it back so I can throw it again. With some head games thrown in. So I throw and she chases. And we go all crazy trying to fool each other. It seems to work for both our pea-sized brains and amuses us both endlessly.

When she's not chasing, she's a cuddler, a sweetheart. Even though she smells funky and her coat gets all ratty and the USPS is on the verge of cancelling our mail service forever because she charged a carrier and had to be pepper-sprayed, she's hard not to love. We watch Dr Phil together and listen as best we can and he's taught us both not to focus on the painful past. Thanks to his wisdom, we have come to accept that the only thing we can control is what lies ahead. Patty and I chose her because she needs to move and we want to move and she makes us feel bad and lets us know when we don't move enough and hopefully that guilts us into getting out and moving more because moving is essential for her and way good for us.

She chose us because anything is better than being yelled at in Russian. Like all relationships that work, everbody gets something they need.

So that's a long intro, but I think you will be happy that you wasted this time wandering into my dog's psyche, because she spends a lot of time waiting for her humans to do something and she is in for a surprise because tomorrow they are, and as well as you now know her, you will want to be along for the ride. The bike ride, that is.
Posted by Pat S at 11:08 PM

Although Brandy charged at me the first time I came to your house, I never got the impression she would do anything more than present a good front.

So she's going out in the big plastic box on the Extracycle, eh? I hope everyone involved enjoys the adventure.

Think of goggles for her in the future. I'm sure you'll both want to pick up speed.