Jacque's headed to the Emerald City. She's been planning and now the time is almost here. I can't blame her because Patty and I headed over there in '91 for exactly the same reason - opportunity. We lasted 10 years. Part of me is a tiny bit jealous because Seattle's a pretty vibrant bike town. But overwhelmingly, I'm so glad to be able to live here because our quality of life is so much better than it was there. If you can make a living in Spo, you've got it made as far as I'm concerned.

Everything about her move is right and she'll bring that sad, congested city to its knees, but not without a couple of bikes. So you can figure out what my job is this week.

This one is staying. Super-small apartment, no room for anything but the practical. It has a little flair, but it's mostly a goofy damn bike, IMO. We'll store it at Ma and Pa's. For a while. 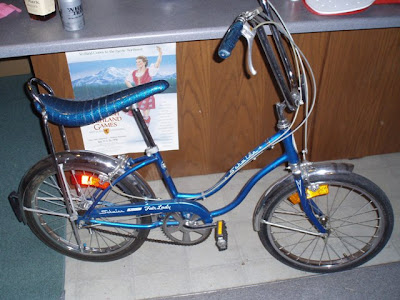 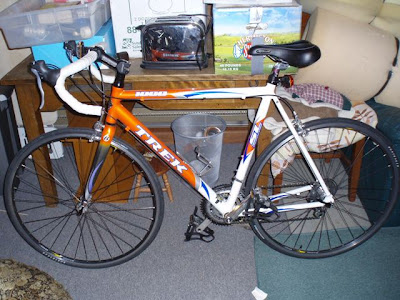 . . . which is good for getting places less slowly in good weather and when you don't have to carry a lot.

And she'll be taking her citybike . . . which she'll need on those rare occasions when it's raining in Seattle and she needs to actually carry something. (Pics in a minute.)

The citybike is a Novara Buzz that I bought after we moved back to Spokane. 2000, I think. It was a little too small for me and slightly too big for her. Whatever, it has worked for both of us. One night early in its life, I got a 6-pack and some reflective tape and went a little crazy. It's kind of hard to miss at night. Ahh, the lasting effects of beer . . . that tape is really hard to get off.

It only has a coupla thousand miles on it, but they've been hard miles. I won't say "beat to shit", but it's been beat to something just slightly less. A few weeks ago, when she was working at Sacred Heart, she had it parked out front in a high-traffic area and some bold douchebag came by and tried to steal it. He wasn't smart enough to break the lock, but he managed to destroy it in the process and I guess he was determined not to go away empty-handed because he stole the chain (I am not kidding) and the pedals (not kidding again) and smashed up whatever else he could. Total bottom dweller. The computer is stopped for good, like a broken clock. From here on out, there's no record of anything. 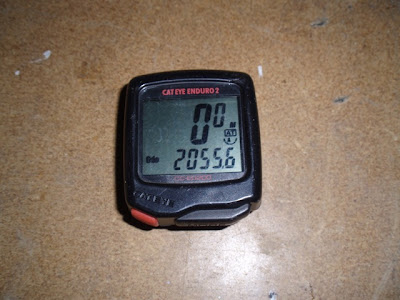 Jacques's old enough to be way independent, but you never stop worrying as a parent and so I put some time into getting it ready for it's next phase. She's going carless as long as possible - I will love hearing how that goes. I don't want to get all nostalgic on you guys, but it struck me that this is probably the last time I will ever work on this bike. Novara does some out-of-the box stuff, in my opinion. It has a 1 x 9 drivetrain, before anyone else was doing that kind of thing. Smart bike. Could use more tire clearance, though. 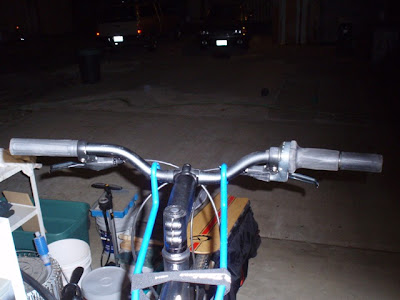 Speaking of tires, I threw on the original 26 inch slicks. Appropriate that they should end up where they started out, I think. Those suckers will outlast the bike, give her great flat protection, and way better traction in the rain than the Tom Ritchey slicks that she's been riding. Rock on, mighty Armadillos. 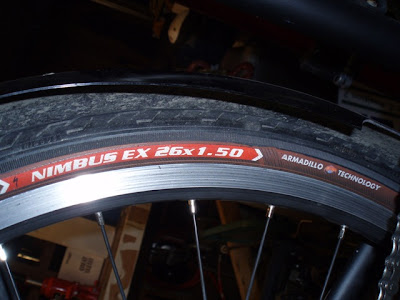 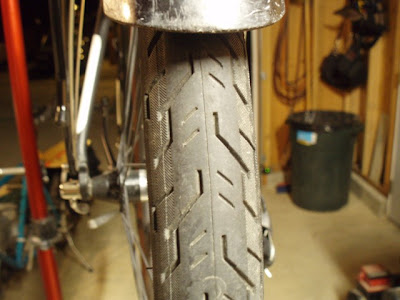 It has a rack now. Because racks can be highly useful. And a pannier grocery bag that Patty donated. When Jacque was younger, we could solve all kinds of problems for her. Now this is the best we can do. 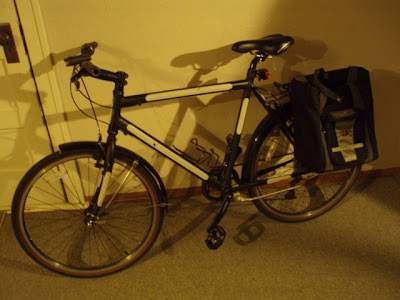 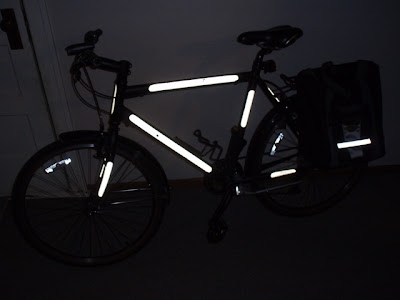 Good luck, Jacque. I'd like to offer you one last piece of fatherly advice: "Force and speed are proportional. Don't hurt yourself." (No, that is not original.) 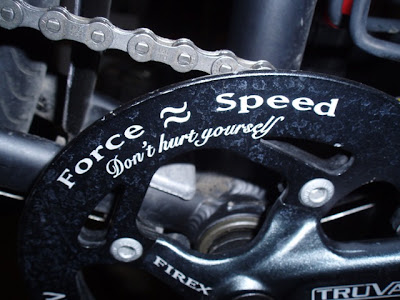