on the twelfth day of bikeness

I'd been really looking forward to day twelve, and it didn't disappoint.  I like to start a momentous day like day 12 with the main event, and then work my way through the more mundane, piddly events.

What you need to know in the way of setup is that the day-glo guy front and center is Hank Greer, who writes the Everyday Cyclist column for Out There Monthly magazine.  He may or may not be planning to write something next month about fatbikes, you will have to pick up a copy to find out for sure.  But assuming he was, he might need to get together with some fatbikers to get some input and ideas for the story and then possibly it might enhance the quality of the column if he could spend some time riding one.

A rumor like this was a good enough excuse for eight of us (some more hung over than others) to rally at 10:00 a.m. on New Years Day at Riverside State Park and kick off 2013 with a righteous leg and lung burn.  3 fats + 5 skinnies = 8 nutjobs. 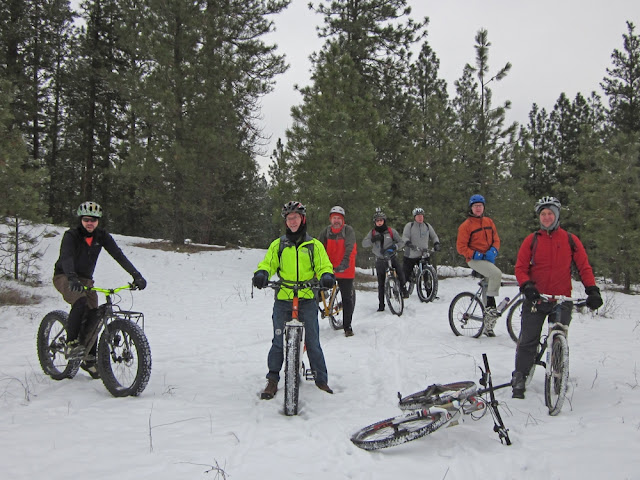 The descent down 5-Minute Hill seems like as good a time as any to do introductions . . .


There were many, nice photo-worthy sights on this ride, but my white-knuckled hands were glued to my grips for most of it.  Not a lot of in-ride action.  But it was a lot of this type of awesomeness . . . 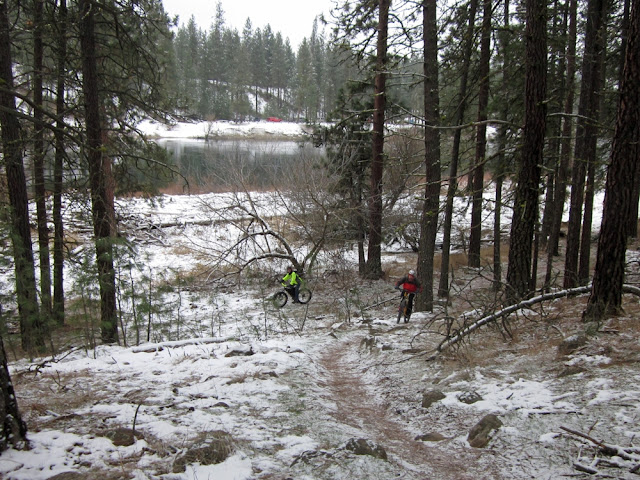 Today's fatbike contingent consisted of my bike with Hank aboard, and Aaron, who rides a Moonlander, which is to my bike what a Humvee is to a CJ5 . . . 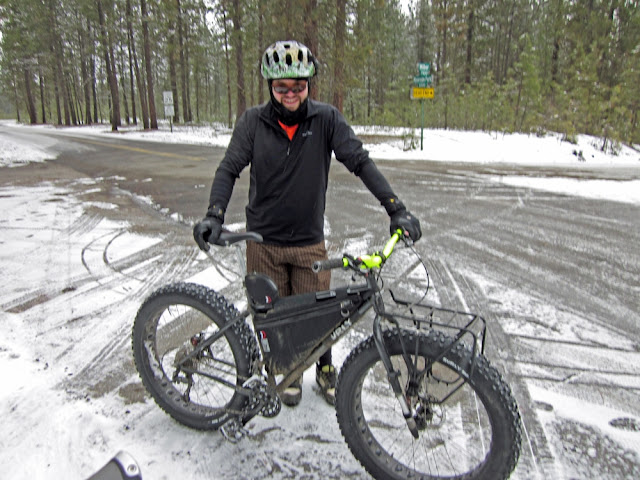 And Dave, of Ocean Shores fame, and the godfather of Spokane fatbiking . . . 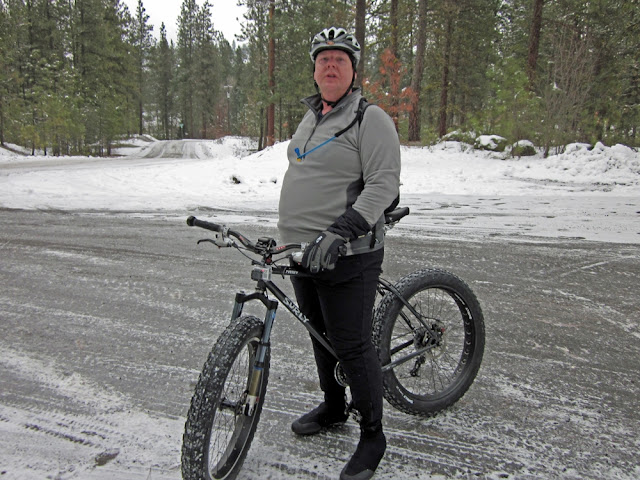 It was a great ride and I was pretty gassed when I got home, but there was something that still needed to be done this day.  The pump track had been dug out the night before and was pretty damn frozen . . . 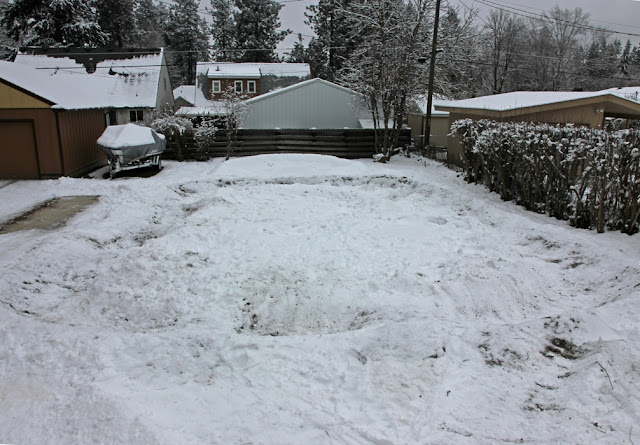 This is just a shot of the paths I cleared to provide entry and exit points to the track . . . 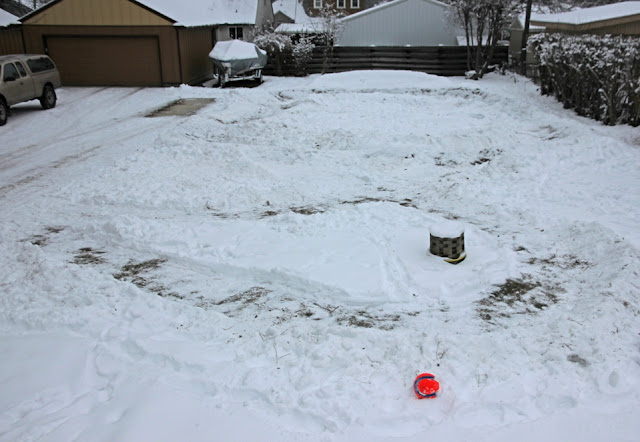 It's a pretty weird looking beast, a shoveled-out pump track, and a little intimidating to ride. 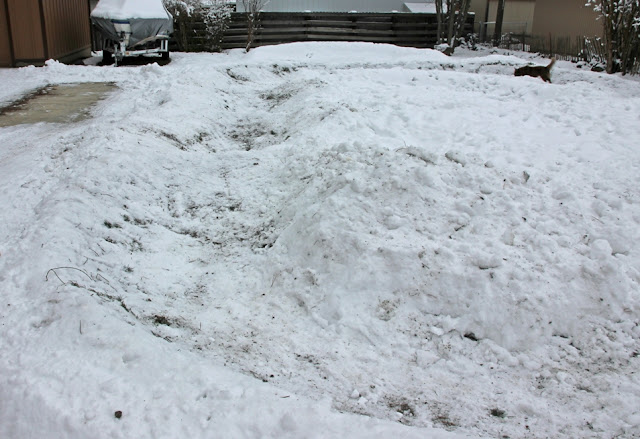 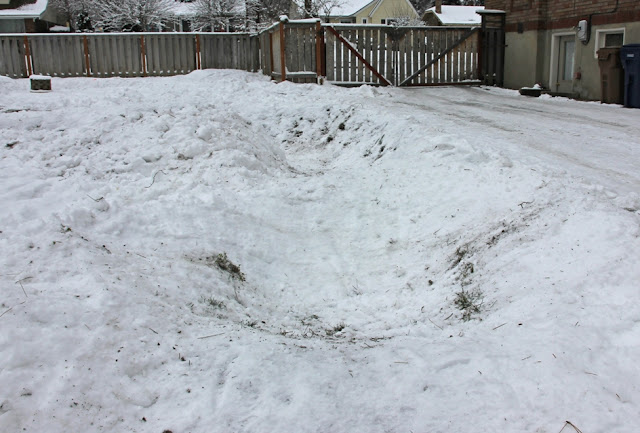 But ridden it was, on this first day.  It wasn't super awesome. Or even straight-up awesome. But it was fun. And it was the kind of hard that generates flesh-eating lactic acid. Reason being, there's a lot of drag generated with all those knobs digging into that little bit of snow that is left on the track. Two laps, tops, before I blew up each time out. What the track needs is tons of riding in, as in laps and laps. And then it has the potential to be awesome, I think. 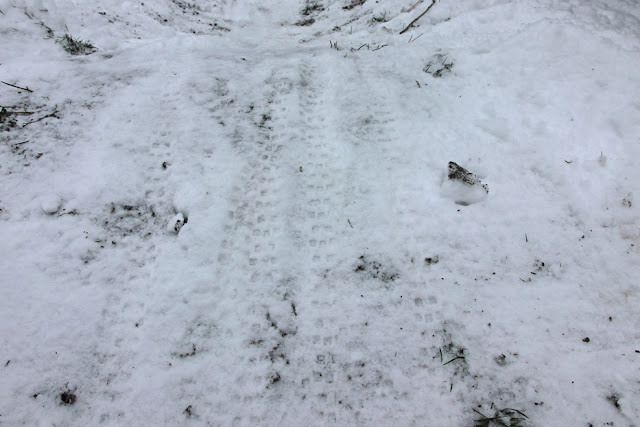 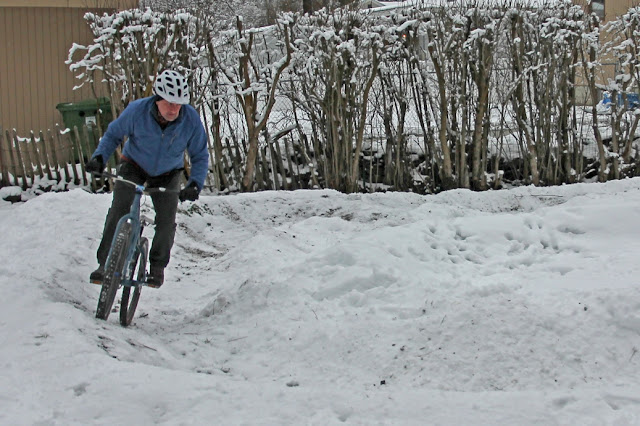 No way Patty wasn't getting in on at least a little of this fun. 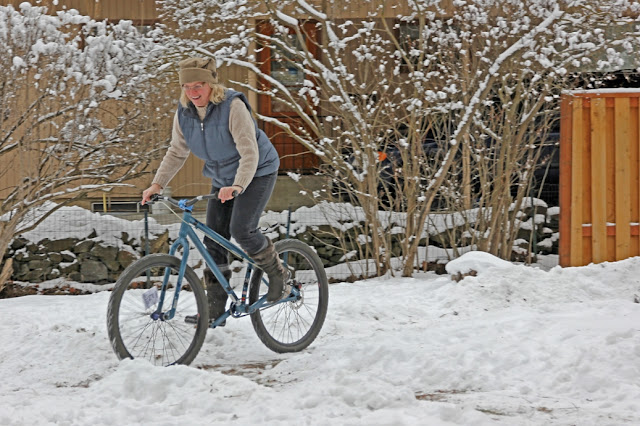 By the time the Riverside and pump track rides were done with, I was pretty damned hungry.  I suggested to Patty that we take a walk down to Bennidito's and grab something awesome to eat. I know, I can't believe I said it either, it was a moment of weakness. But of course it was rad. 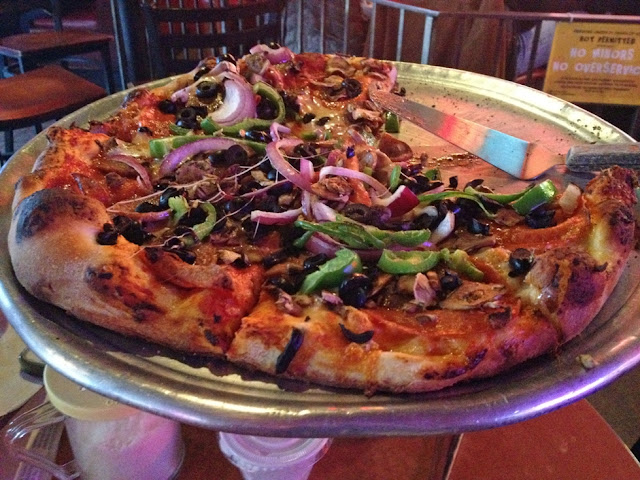 Amidst all the day's action, Brandy had been left out of things and so there was that to rectify, which we did. 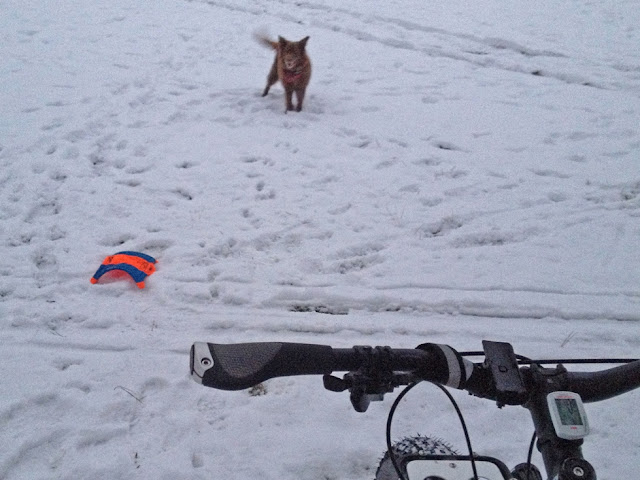 I feel like I spent the whole day outside and I can't imagine a better start to the new year.  It's been a great vacation and I feel like one lucky, exhausted little bastard.

Thanks again. You've sold me on the fun of fat bikes. Now if I could just sneak one into the garage. It looks like any other bike, right? The wife won't notice. ;-)

Just paint it the same color as your Elephant and it will blend right in, I'm pretty sure.

Hah! I thought there were a lot of fatbike tracks out by the airstrip turn-around! I was out there around noon, trying like a damn fool to complete the 7 mile loop.

I did happen to catch Joe's biff on video

Looking for the Ultimate Dating Site? Join to find your perfect match.