I asked Patty out on a date ride yesterday morning and while I wasn't exactly secretive about where we were going, I wasn't exactly fully forthcoming about every last detail, either. She's awesome and so she played along with my lame little game. This picture makes it look like we were stopped, but we were rolling. How awesome does that make us?


Our primary destination was the Donut Parade. This is *thee* Spokane donut shop icon. If  Strick's were still going, we'd have a race, but they aren't and so DP is it. I went to high school just up the road at G-Prep and I skipped outta one or the other of my morning classes on quite a few occasions just so I could head down and pick up a coupla their fine maple bars. On those breaks from book-learnin', DP schooled me real-world on what a proper maple bar should look and taste like. It's a bit of a curse, actually . . . once you've experienced maple bar nirvana, it's hard find one that lives up to your high expectations. I'm mostly disappointed with what's generally available to grocery stores and even the donut shops. I'm not trying to be all snobby or slam anyone, it's just that a warm, fresh DP maple bar has the ability to stir your soul and influence your day.

DP has been through some tough times in recent years - the gentleman that ran it for decades finally aged out and tried to keep it going, I think, by selling it to someone who he thought had what it took to keep it going. But they didn't, and I think he had to step back in and take it over. (I could be so totally screwed up on all this, so don't take any of that as fact.)  I don't know what happened between then and now, but the place is being run by highly energetic people and they have expanded their seating area and the vibe is totally energetic and upbeat. The customer service is over the top. Someone obviously recognized the opportunity that the icon provided and has decided to run with it, in the right direction. It is a currently a very, very rad donut shop. 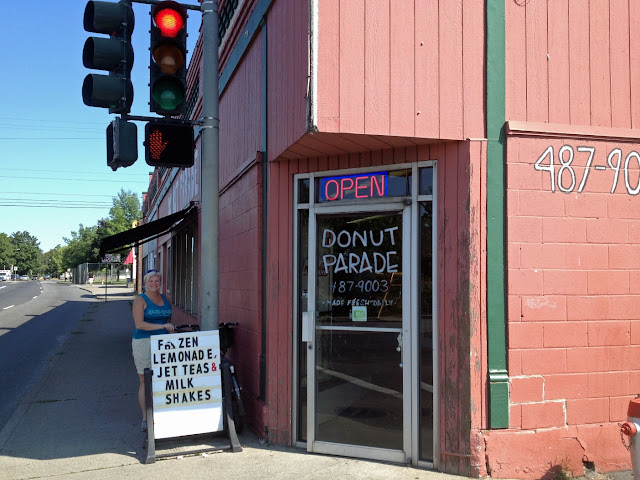 We weren't there for froofy frozen lemonades or jet teas though. Please. This next pic might provide a clue as to our motivation. 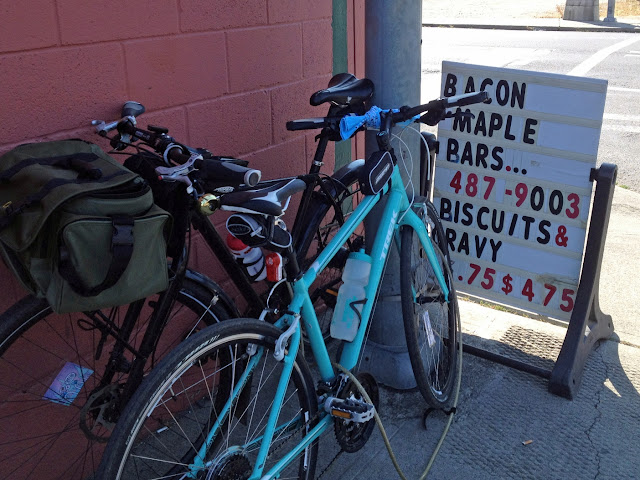 The display case was awesome, but we weren't here for any of this regular stuff. 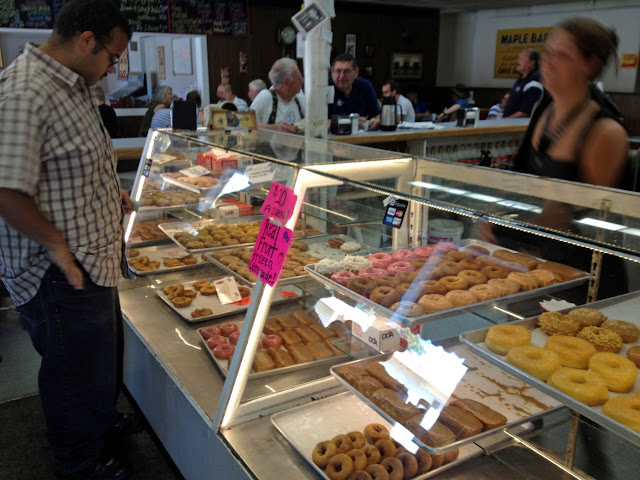 In semi-hushed tones, we made it clear that we were interested in the goods "behind the counter". A nod and a wink and the exchange of four dollars ensued. After a few moments, we were handed a nondescript brown paper bag package. We took it and left, trying to avoid making eye contact with anyone.

With our booty secured and under wraps in my front bag, we pit-stopped at Williams Seafood Market to pick up fish for the evening's 'cue. 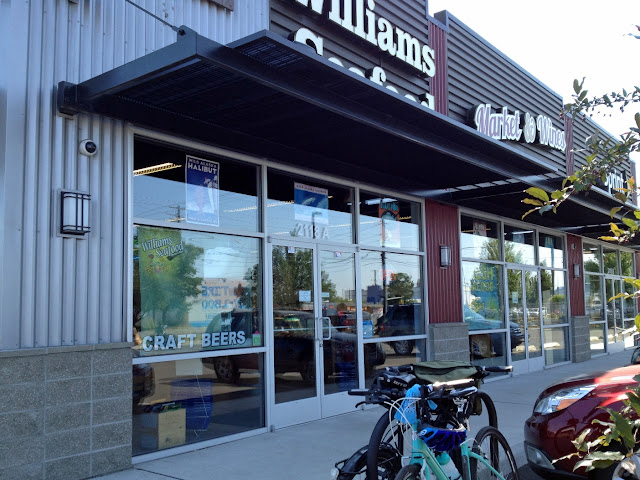 Steelhead was on sale and fit nicely into our meal plan, so the decision was easy. 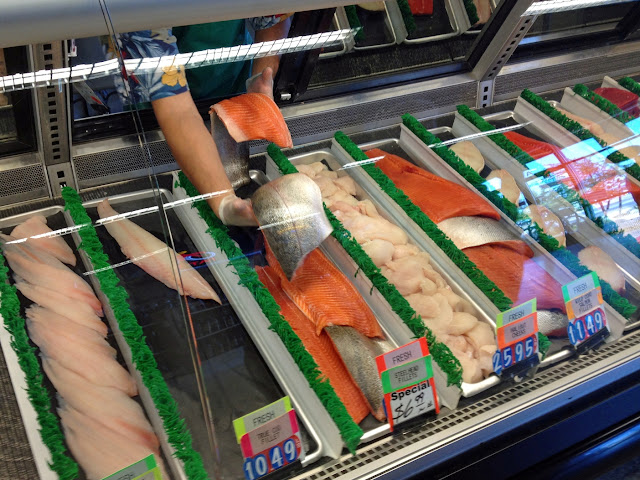 Meanwhile, the DP contraband was simmering in what was becoming an oven of a front bag, fired by the increasingly intense morning sun.  We talked over our options for a shady spot to rest-stop and settled on Corbin Park.  Upon arriving, we both glanced nervously over our shoulders, to make sure we were alone. Once satisfied, we pulled the package from the bag. 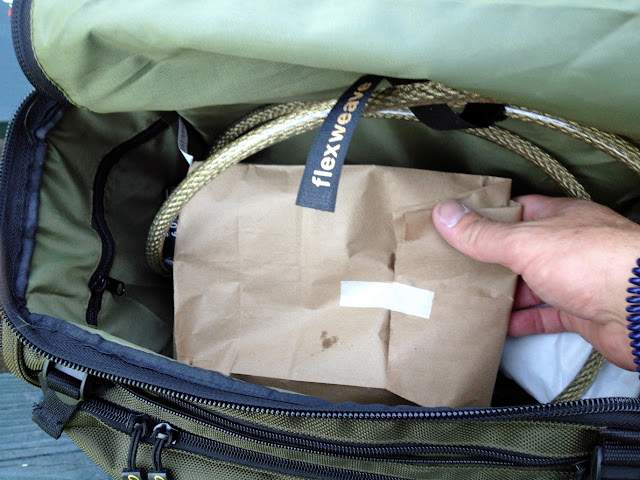 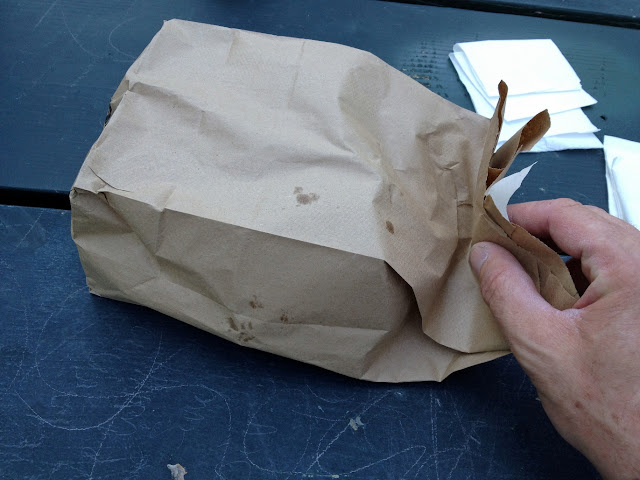 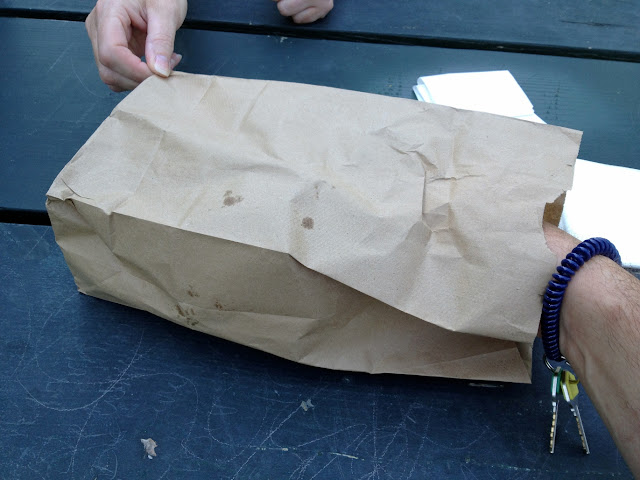 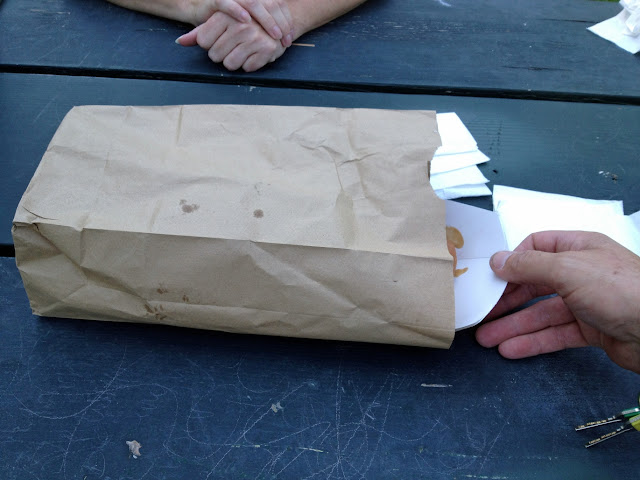 . . . Ta-Da!!!  It's called the FLATLINER and it consists of a maple bar stuffed with 2 end-to-end sausage links, and topped with 2 slices of bacon. And then slathered with maple topping. 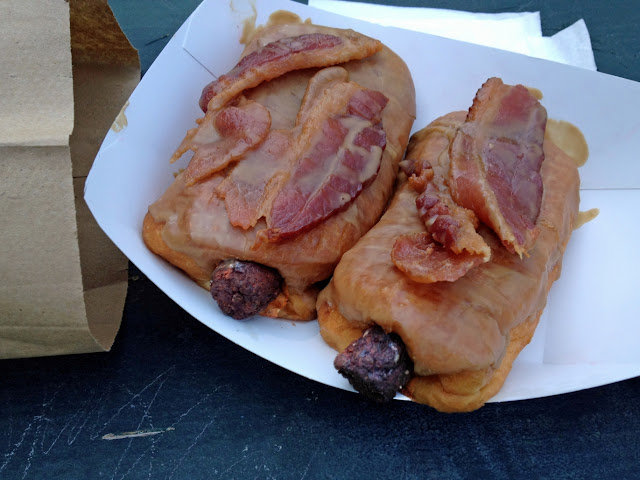 Once out of the bag, we just looked at it for minute and then we looked at each other and then in unison, we spontaneously busted out laughing. We couldn't even fathom the unholy excess of what we were looking at, and what we were about to embark upon. 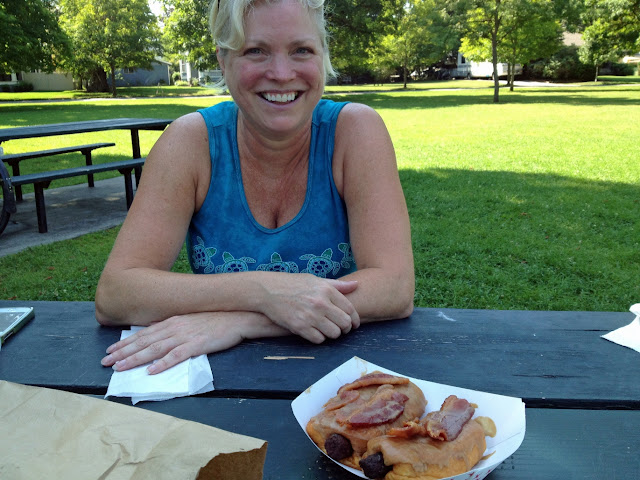 After some time spent processing it all, we did finally dive in.  The soft/crunch salty/sweet thing works pretty dang well, actually. 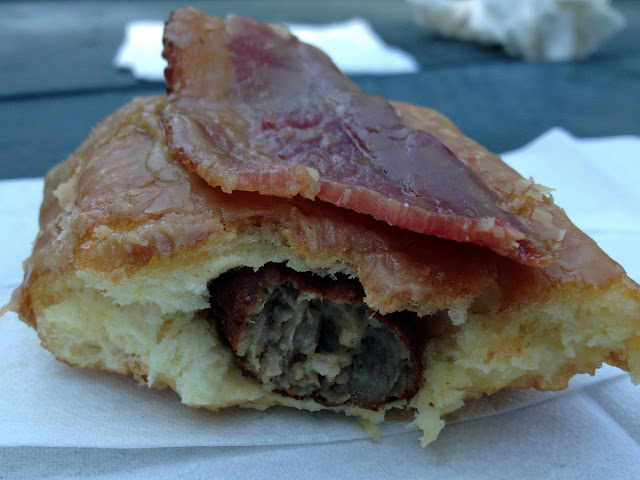 You can read all about the Donut Parade HERE.

And  you can read Doug Clark's perspective on this culinary beast HERE.

On the way home, we followed a coupla River City Red riders partway up the south hill.  They were just cooling off after their group ride, I presume.  Patty was buzzing on a sugar high and wanted to throw down, but I talked her our of it. After everything it had taken to get our flatliners and then get them down, I didn't want hers coming back up.

I asked Patty if she would go out with me again sometime.  After a way-too-long pause, she said yes.  I feel like I may have dodged a bullet.  And then on the other hand I think maybe the greatness of this date may only become apparent to her given some perspective that only time can provide.
Posted by Pat S at 7:36 PM

I appreciate your series of dramatic shots, but the grease spots on the bag foreshadowed greatness. Those pork-fortified monstrosities look pretty damn excellent. Donut purveyors in the Denver area are way behind in bacon infusing technology.

Ya in hindsight, the grease spots were a dead giveaway. You can run from animal fat but you cannot hide.

Did you know that you can shorten your long urls with Shortest and make dollars from every visitor to your short urls.