I've been sorta jonesin' to go race 'cross. "Sorta", because I've known I'll get killed, but it's the bug's attraction to the zapper kinda thing. Pretty mesmerizing. I don't really wanna travel very far to get killed and the last "local" race for the next few weeks in the Inland Northwest Cyclocross Series happened today, so I was feeling a bit of pressure. But lazy, at the same time. It was gonna take a bit of work to convert my bike out of commuter mode and into race mode, and I just didn't have the time or motivation for that. So it looked I was gonna pass. Again. 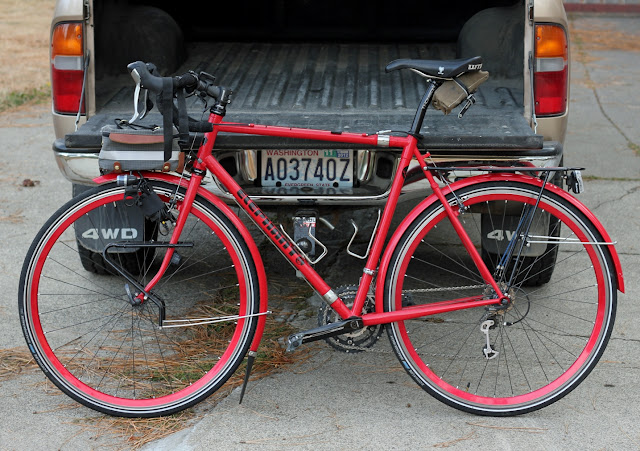 And then it struck me . . . I have another semi-'cross-worthy bike in the stable, that could be race ready in a fraction of the amount of time and effort. It's been for sale on craigslist, but there've been no legitimate bites. So I pulled the add and changed the tires, and in a matter of a few hours, jumping into the race had gone from a pipe dream to a personal challenge. I spent the remainder of last evening and overnight channeling courage from great historical figures who shall remain unnamed. 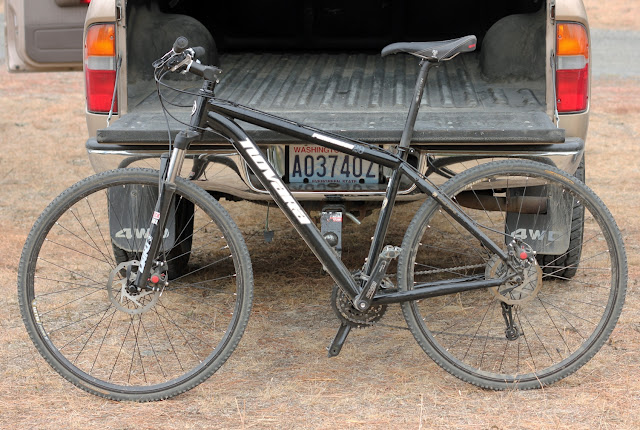 Back to the title of this post, then:  It's been said that it's the key to a happy life. I think it comes in pretty handy at bike races, too, especially if you develop the skills to adjust your expectations on the fly.

I was talking to fellow bloggers and racers in my division Hank and Scott, about this very thing, just a few minutes before the race.  Hank talked about the pre-race setting of goals and the need to adjust his from not getting lapped to not getting lapped four times during the downtown crit, back in this post. Classic stuff.

I was under no illusion, sitting at the starting line looking around me.  Guys who are racing in the 40+ and 50+ division aren't there for a good time. They're balls-out in denial that they're getting older and intend to prove it by stomping on each other. It was more than a little scary. But I wasn't about to back down from this or any other kind of intimidation! Even with Hanks's experience and good advice basting my frontal lobe, it seemed like a pretty long course, and the race was only 45 minutes and so I decided that my goal was not to get lapped. Even once. Hell yeah!

Two laps in, it was time to modify my expectations. Holy balls, those bastards can fly.

The 40+ group had started 2 or 3 minutes in front of us 50+'ers and it was by them 40+'ers who I'd been lapped. I was thinking that a good and reasonable new expectation was not to get lapped by the  50+'ers. At just about the same time that I was having that thought, it was apparent that it was once again time to readjust my expectations.

Look, I'll spare you the long and tedious narrative chronicalling the landslide of personal expectations that ensued and cut right to the chase: My final, non-negotiable stance was that I shall not get lapped by the entire 50+ field. And that I shall not finish DFL. I think I accomplished both. As far as the DFL thing goes, it's kind of an interpretation issue - I'm pretty sure that some people in front of me dropped out, either because of mechanicals or because they are so ancient that they no longer possessed the will to continue. So as far as riders who actually "finished", yes I may have been last. But I summoned the will to finish last (wait, that came out wrong), and so I hereby proclaim that that this DFL finished ahead of those DNF's. Since this is my blog.

If you're thinking the day was a major disappointment, nothing could be further from the truth. I had a blast. And of course once my race was over, I was free to wander around and snap a few pics. What delightful photo opportunities. 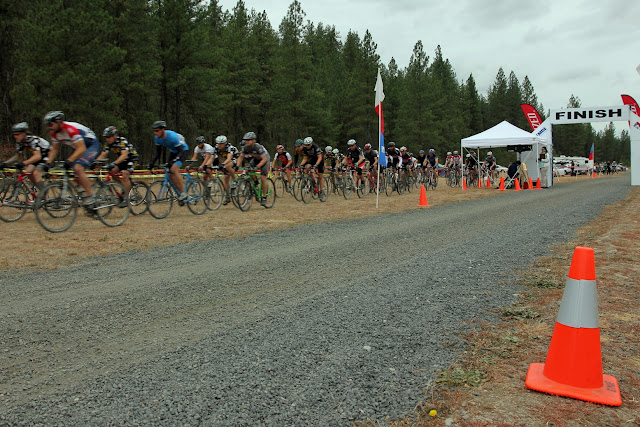 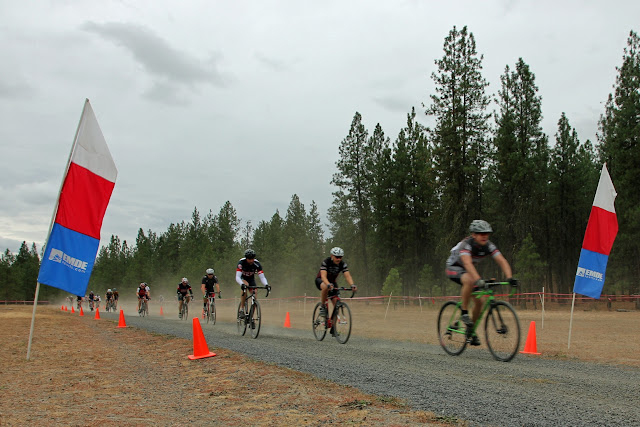 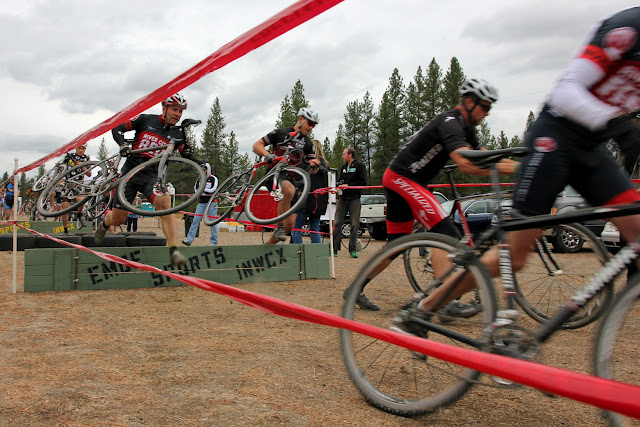 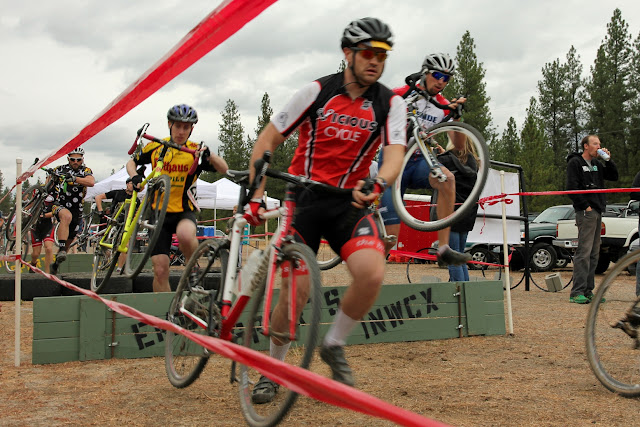 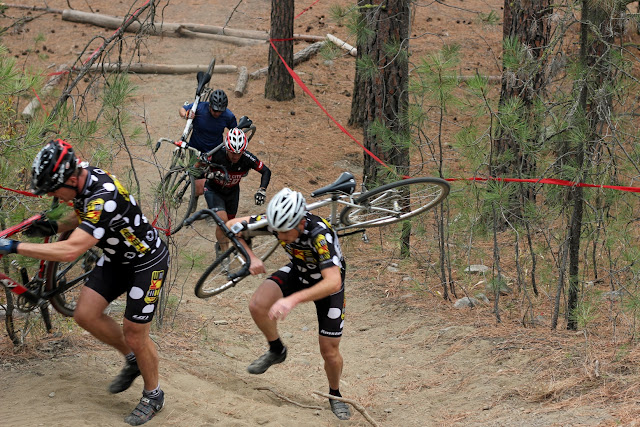 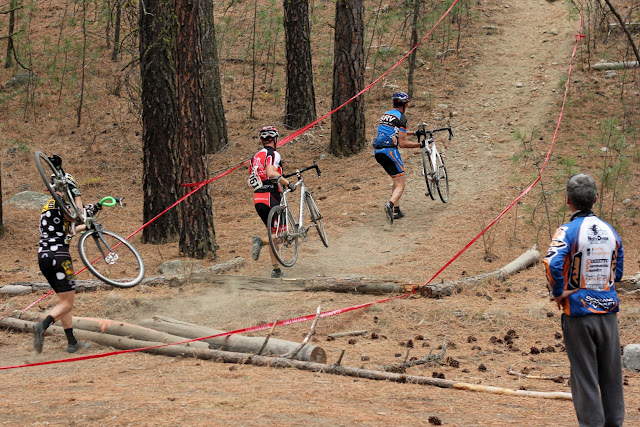 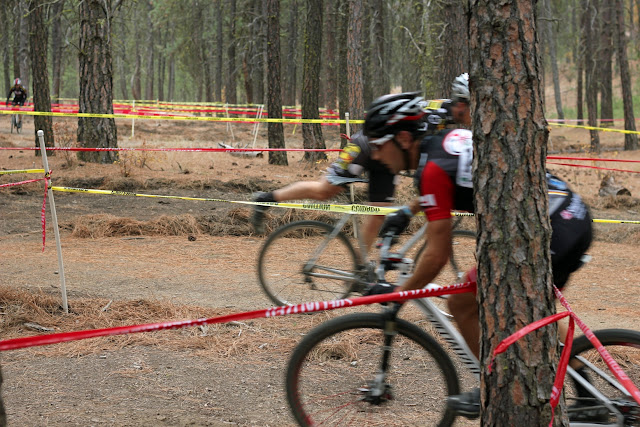 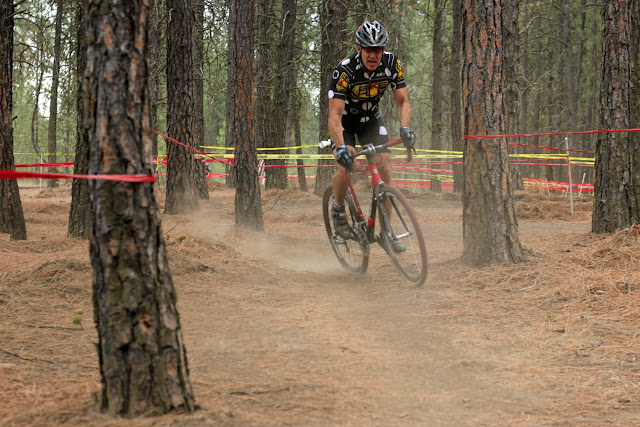 Mr. Brown was locked in an epic three-way battle over the course of this race. I hope he persevered. 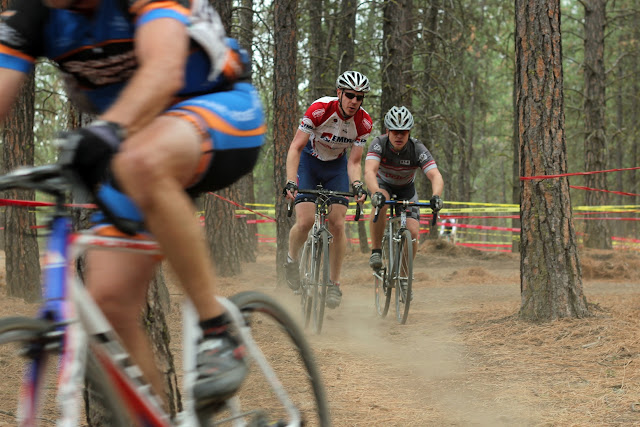 During my wanderings of the course, I crossed paths with Aaron and his Moonlander. The Moonlander came out last year and is the big brother to the Pugsley and all the other "normal" fatbikes, including mine. It sports a tire that's a full inch wider. Holy cripes, it's badass. To my knowledge, it's the first one in Spokane. It's definitely the first time I'd seen one in person.

Aaron's stoked to ride with some other fats, as am I, so it may not be the last time you see him on this blog. The Spokane fatbike contingent appears to be coalescing. And just in time for winter. Kind of exciting. 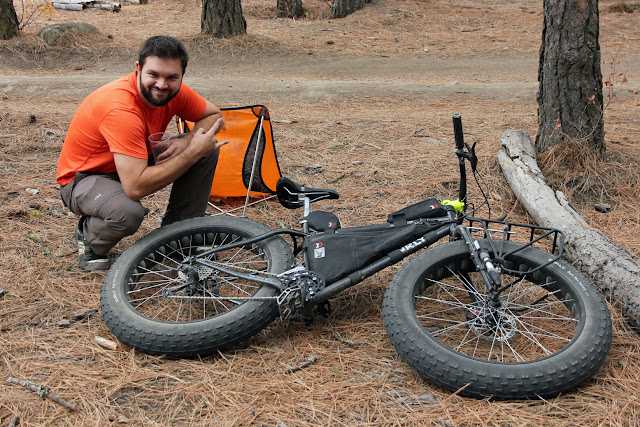 Great to see you out there, Pat and I hope you come out again. Maybe we'll get lucky and have mud as an exponential fun factor.

hey it was good to see you. Man, I know all about the motivating factor of the DFL tag. But it's funny - There's been a couple races where I was sure I was in last place, but when I checked the results I was surprised to find that 2 or 3 guys placed below me. There's always a mechanical or two it seems, or lo and behold, somebody behind me who I didn't realize was back there.

Pat that is so awesome that you came out to do the cyclocross race on Saturday. I love the way you described the 40 + and 50 + categories. Cracked me up a lot, but yet so much truth to it. We really are in denial. Look forward to seeing you at some more.