Seashells By The Seashore 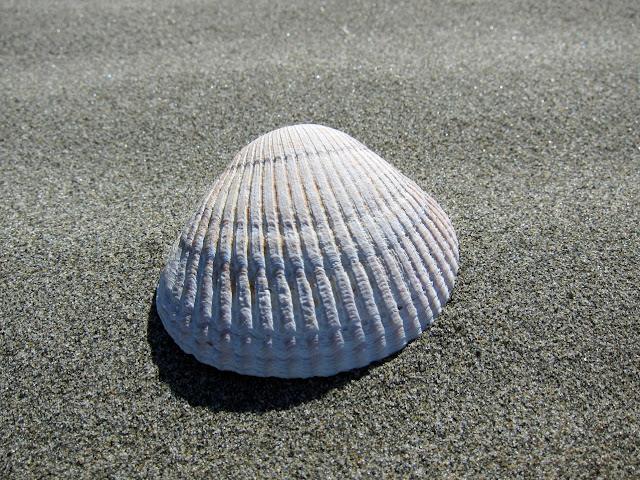 Over the weekend, I experienced a buncha 'firsts' - first time riding with another (let alone four!) fatbikers, first time riding in real-deal sand, and first time meeting in the flesh a group of guys that I'd previously met only virtually. The event that drove all this personal growth was the 2nd annual Northwest Fatbike Meet. I was aware of last year's inaugural edition, and probably would have thrown down, except for one minor problem: I was still waiting for my fatbike to be delivered.

I didn't have that particular problem this year and so I was all in. Both the first and second editions were held at Ocean Shores and so a road trip would be in order. Damnit, into each life a little rain must fall. ;-)

FFB ('Fellow Fat Biker', not to be confused or associated in any way with the dreaded BFF) Dan offered to drive and I narrowly avoided biting the end of my tongue off in my enthusiasm to accept.  He showed up at my house just before noon on Friday and we loaded up. A minor crisis ensued whereby there was not enough room left for the bikes once the beer was loaded, but after some creative packing, we were on the road. 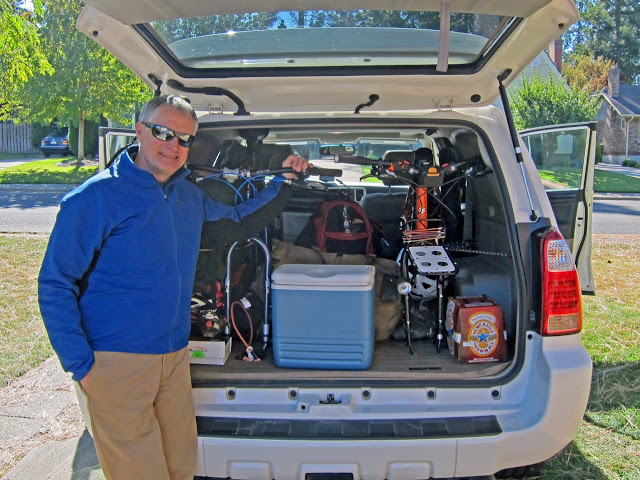 The trip was long and fraught with Friday rush hour Seattle-area traffic jams, but we eventually arrived and went through mandatory orientation training. 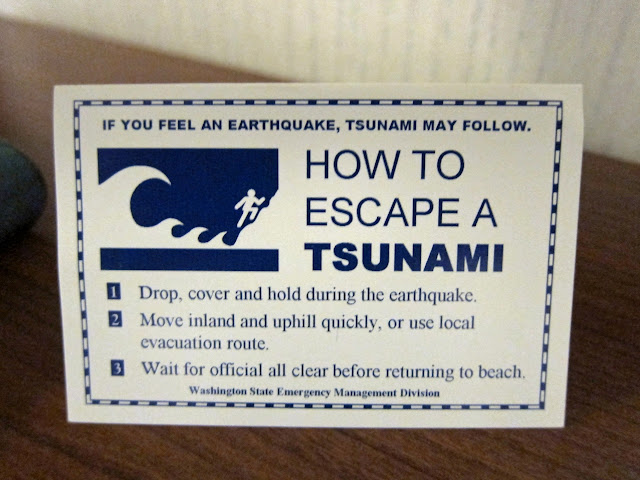 After which we were ready to, and did, hit the beach. We met up with Dave (who had been waiting for us in the bar, surprise of all surprises), the other Spokane-representin' fatbiker. 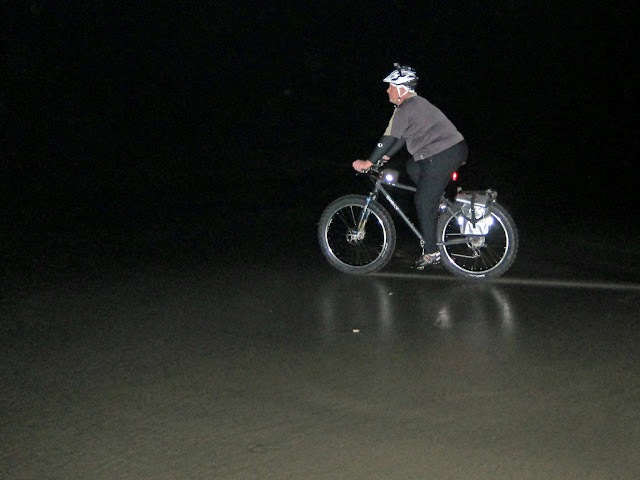 No one will ever know the exact details of what happened that night, but it's possible that some beer changed hands under the moonlight. 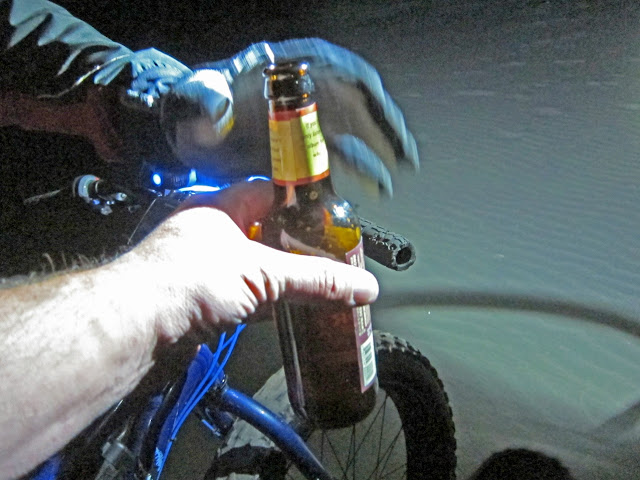 During the ride, I fell into a very real and deep and filled-with-seawater hole in the earth. I quickly became very wet. Since Dave had been here before, I asked him what it was that I'd fallen into. Without missing a beat, he answered, "that was a 'rip channel'." I was in awe of his knowledge of all things ocean. Only later would I find out he made that up on the spot. Hilarious, the world's full of jokers. Some payback is in order, at some opportune moment in the future.

At the conclusion of the ride, we discovered the single greatest resource at our disposal, as patrons of the Shilo Inn:


No one got enough sleep, but if we did it wouldn't have been a legitimate road trip, right? So that was cool. I guess. The weather at Ocean Shores was unseasonably and gloriously freaking awesome and we hit the shores with our full contingent of five riders on Saturday morning. It was short-sleeve weather from the word go. 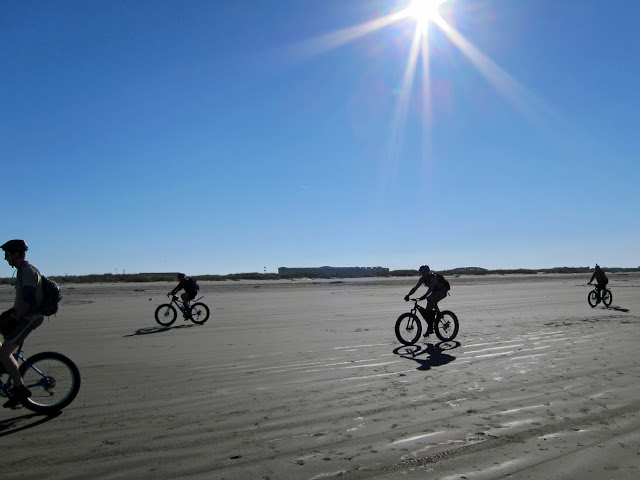 By some strange coincidence, or more likely because it has long been our destiny to be fatbike-cool, no two bikes were anywhere near close to the same and we had all four "major" brands represented:


Ward is awesome, the resident host. I'm pretty sure, after meeting him, that he has sand flowing in his veins. He's been playing on bikes in the sand for years and was one of the forerunners of the fatbike movement. He was playing with snowcat rims and low pressures long before the Pugsley was even an idea at Surly. 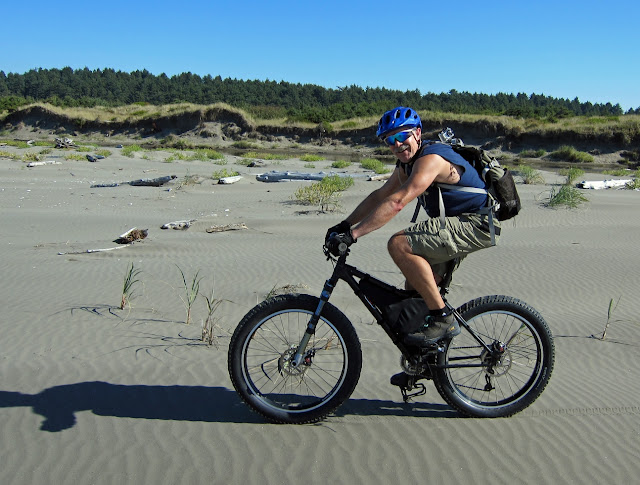 Randy is a longtime buddy of Ward's and was on Ward's Fatback for the day. The rest of us disliked him immediately because he is so skinny and fit. And because he skims across crystal-clear, sparkly water, while we all sink in the same dull, murky stuff. 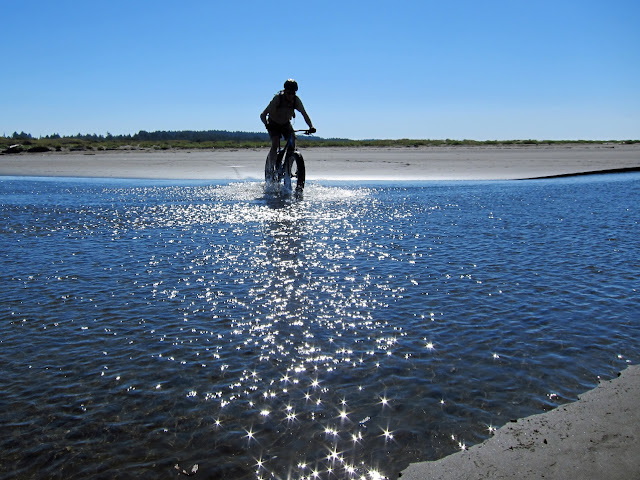 Meanwhile, my bike was giddy with the enjoyment of being in its element and so of course I had to photo-document some of its joy. 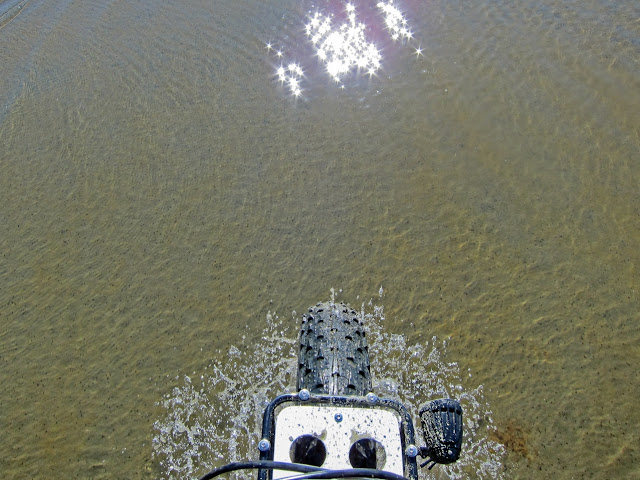 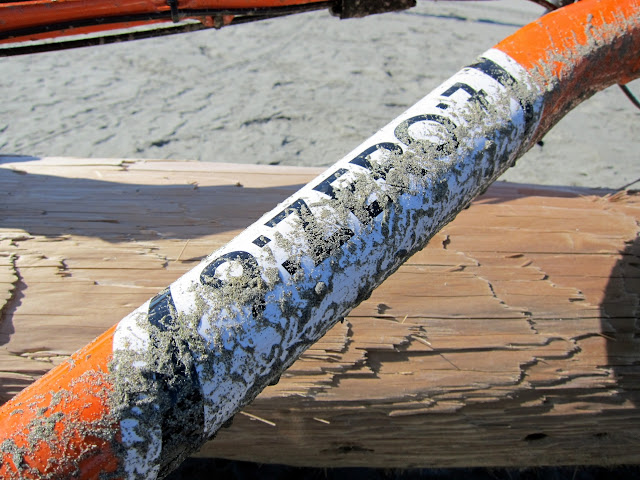 We lined 'em all up for a glam shot. We've probably been watching a little too much TMZ, but hey. 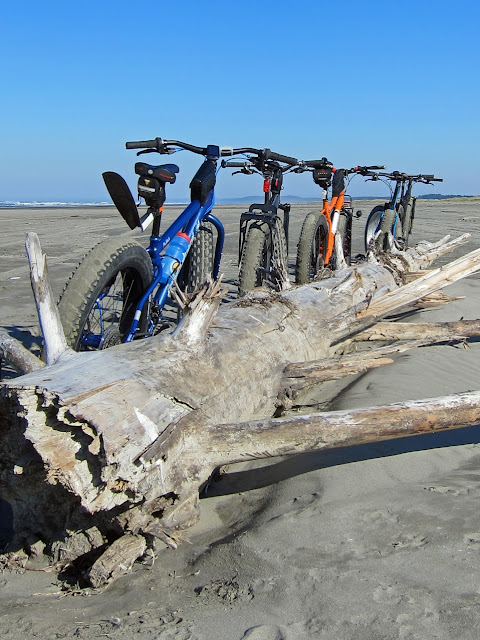 At some point - I don't know how - I ended up with a flask of spirits in my hand. I swear to you I fought the
good fight, but the bastards I was riding with wore me the hell down. Every man has his breaking point.


The tilting of flasks turned out to be almost as much work as the turning of cranks and we were soon famished. Fortunately, we were not far from the Green Lantern, a super-awesome establishment just off the beach. 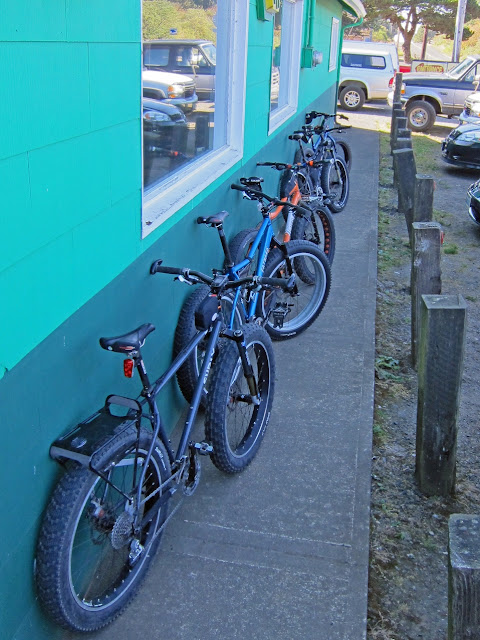 I'd scraped up my arm on some brush somewhere along the ride in. The pain was excruciating and left me with no other choice than to utter the words I hoped I'd never have to use: "Beer me!" (Better to know the words and have to use them than need them and not know what they are. Or something to that effect.) 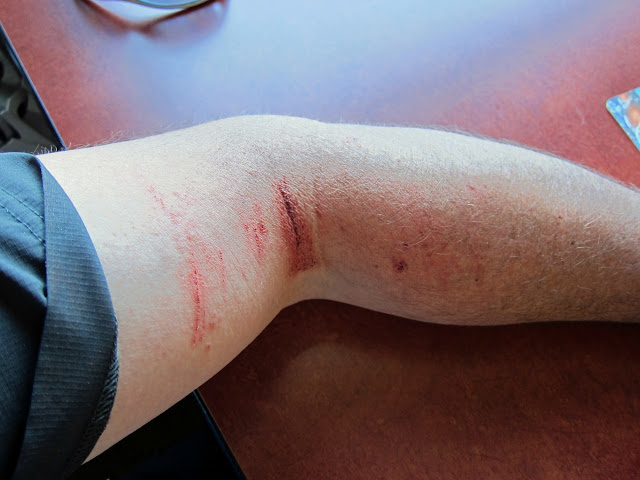 After all that I'd been through, I thought I deserved a good meal. Yep, underneath the cheese, onions, chili and ketchup are two hamburger patties and a bun. It was flippin' spectacular and that's a major understatement. 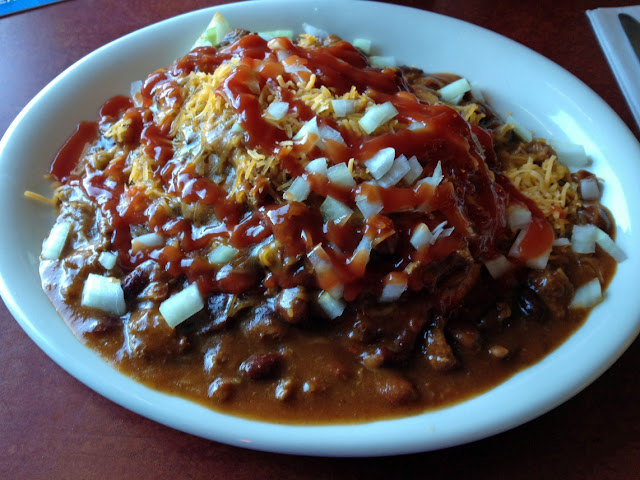 Due the fact that I was experiencing some major digestive trauma, there were very few pictures taken on the return trip. At some point however, the riding ceased for the day and it was once again time to hydrate and bond. We poured every bit as much energy into this task as we did into the ride. Maybe slightly more. 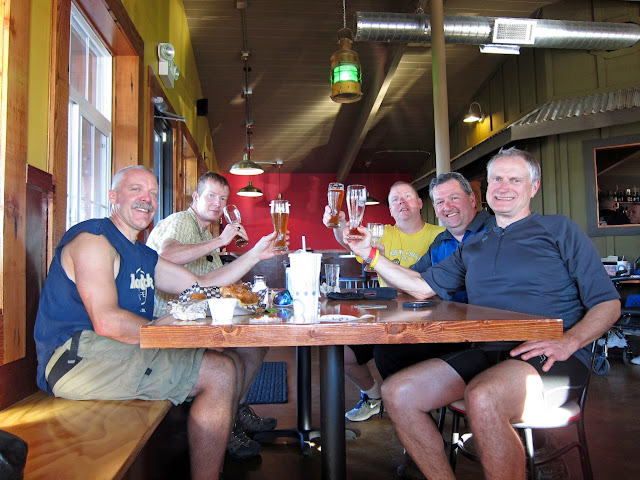 We ended up in a great frame of mind to take in the rad sunset. Kids and birds and all other manner of creature seemed to be enjoying the warm light and warm air of the splendid evening. 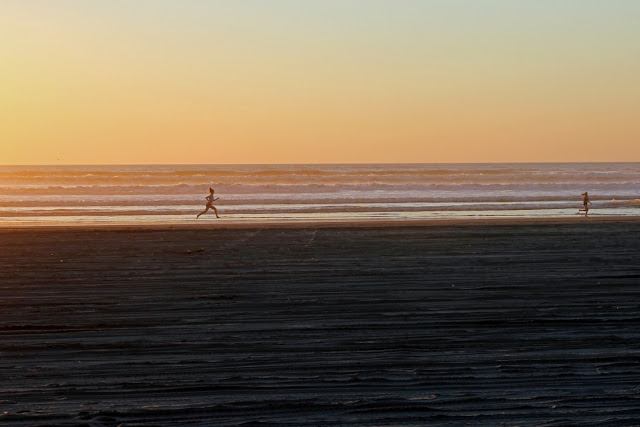 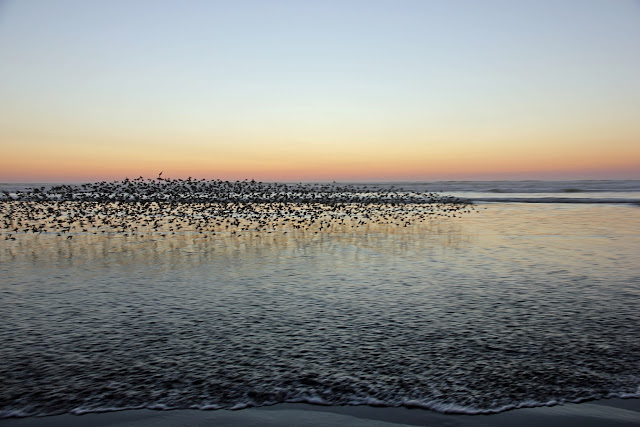 Still, the day was far from over. Last stop was Ward's place, and his museum-like collection of past and present fatbike hardware. 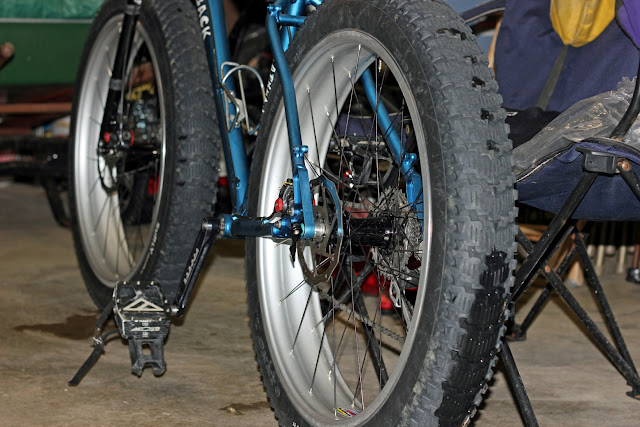 There are some major challenges to be addressed regarding the proper future course of evolution in fatbikedom and as a group, it had become clear that the responsibility of pursing and achieving truth -whatever the cost - was paramount. We spent a few moments in earnest intellectual pursuit . . . for the greater good. 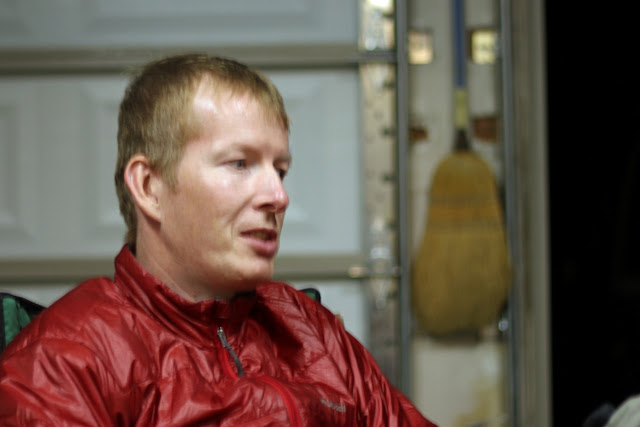 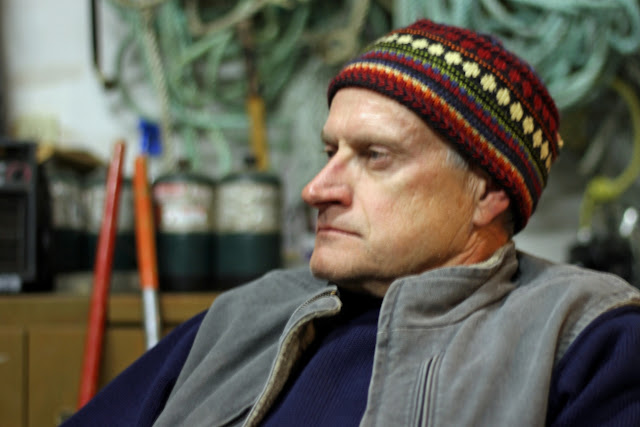 And then, apparently, a wave of fatbike hysteria came out of nowhere and swept across us like a tidal wave, and things went totally to hell. 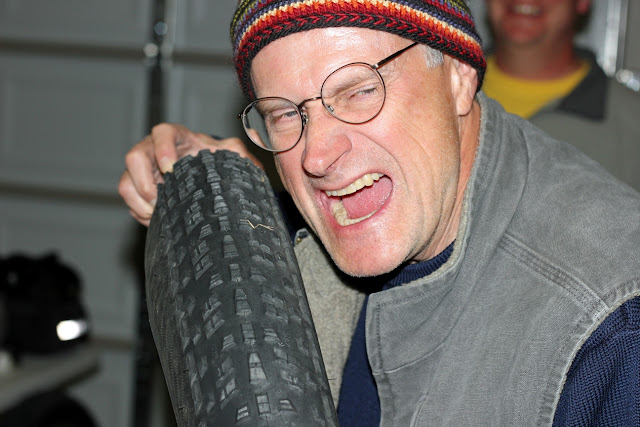 Sean (center) arrived from Seattle, and things went from bad to worse. All hope of reasonable and measured fatbike discourse had disappeared, at least for this day. 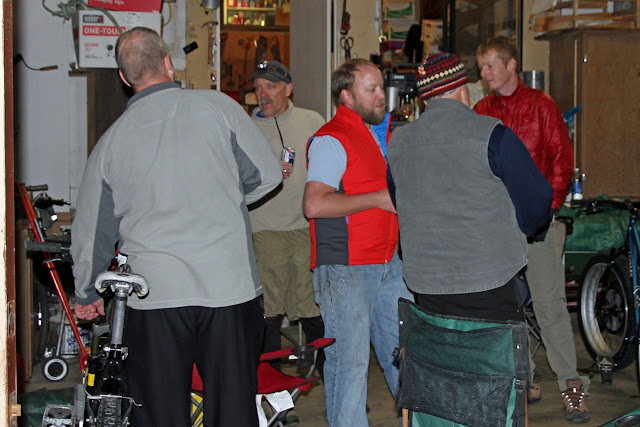 Before embarking on the return trip today, Dan and I were able to get out on the sand for another coupla hours - the riding was so good, we just wanted to take in as much as we could. 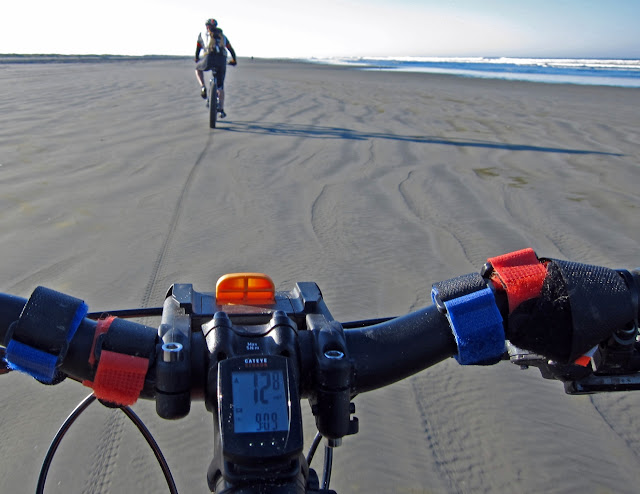 There always seems to be a lot of interesting sights on any ride along the beach. 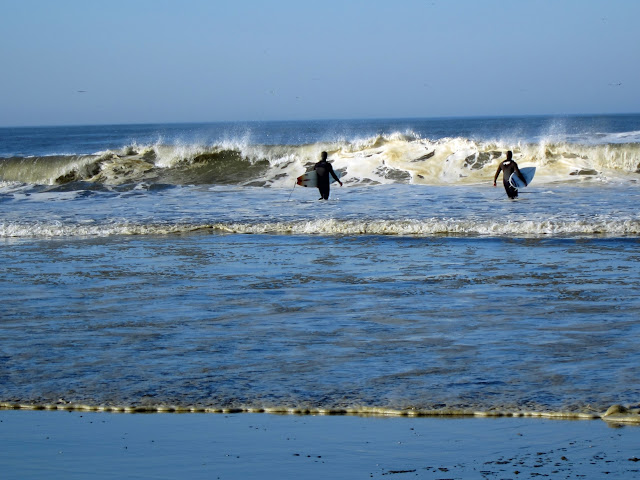 We eventually reached the jetty that is the southern terminus of the beach at Ocean Shores.


In conclusion, and to be halfway serious for just a moment, I had one of the best weekends on a bike that I've had in a very long time.  Riding on the sand, even on a fatbike, is huge exercise, of which we got plenty. And then there's the scenery, which is over the top. And good food and great weather and excellent company . . . which makes for an experience that's just about as good as it gets, bike-wise. I feel like one very lucky bastard right now.
Posted by Pat S at 12:41 AM

I love this post, Pat. Excellent prose and pictures. I feel like I'm right in the middle of it.

Wow! Looks like a great time. The best I've been able to do for sand riding are some short stretches of beach at local lakes and a couple of spots along the river.

The fun that it looks like you're having may just be worth it to me to make a very long drive. Having been landlocked my entire life, the ocean sure is mesmerizing. The Washington Board of Tourism may need to put you on retainer.

Thanks, Hank, I appreciate that. It was a fun event to document.

Andy, I hope you get the chance. It's a really unique and wonderful experience.

I have some stuff called Salt-x that you may want to borrow to rinse all the salt off your bike. That stuff is evil.

Hey check it out- Rip Channel is an actual term:

Ha! Okay, you've redeemed yourself. For now. Actually, after this weekend's experience, I was beginning to think that a rip channel is what happens when the relief channel on my saddle gets packed with sand.

Thanks, Ward. I'm gonna give it a semi-teardown soap and water scrubdown and see how that goes. Good to know about Salt-X, will have to keep that in mind if I do this again.

Looks like a fun weekend, but mostly I'm glad the jerseys have grown on you. Dan always does a good job representing.

And now that the jerseys meet your approval, we will have to start beer tasting soon. Hopefully in a few short weeks. Finally.

Rest assured that Dan was extra professional while clad in his River City Red jersey - a 50% reduction in f-bombs AND he quit terrorizing the seagulls.

There are so many things right with this post... road trip, fat bikes, beer, and good food. Time well spent. We rode our Fatbacks out on the beach a few times after the snow melted last year, and I can attest that riding fat bikes on the sand is hard... constant effort, wind, and no rest. Good stuff.

Our local bike shop is putting on a Veteran's Day cross race, and in addition to the normal cross race shenanigans there will be a fat bike race this year. In order to start we'll be measuring tires with an anti-UCI measuring device, 3.5 inches or bigger only. Fat is where it's at.

JMH, the fat cyclocross race is just awesome. The 3.5" min tire width rule, well it rules. I've been pondering jumping into one of the local series races with mine.

Makes you want to live on the west side of the state...

Mmm, not exactly. Half an hour sitting on I-5 is all it takes to remember why I left.

oh man, thanks a lot I've got fatbike fever again. I'm already thinking of selling a guitar my wife doesn't know about but probably suspects is hidden downstairs to pay for a Vaya or similar gravel/off-road/road/commute bike. Now my wheels are spinning to come up with a way to sneak a fatbike into the garage, too. Entertaining post and great pics to boot.

Great report and lovely pictures
We liked the video toast to us UK guys who were out on our group ride the same weekend!
We were in a mobile dead zone so could not send a toast but drunk plenty!

One day we will have a continental group ride -:)

Did you know you can create short links with Shortest and earn money from every visitor to your short urls.

Want To Increase Your ClickBank Banner Traffic And Commissions?