I'm very much on the fringe of road racing in our area, but I help out with setup for some of the races and as they go, this one is super low-key, setup-wise. Normally I'm out on the course a while before people start showing up, but in this case, I was able to hang around in the staging area a while longer before heading out. It was SO great to see some friends that I hadn't seen for quite a while and just really made me realize and appreciate the great friendships I've forged while roaring around on two wheels. 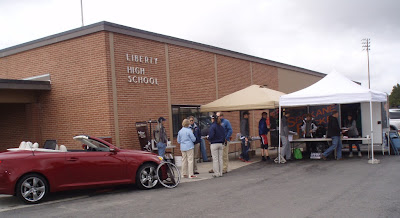 After a bit of setup, I also did the flagging at one of the corners. Flagging can lead to some confrontations with motorists as you are [gasp!] holding them up for a few seconds, and I do what I can to be the best ambassador and wave and smile like hell, but still, some people have it in their minds to be a-holes and there's not a lot you can do. Today was fairly uneventful for me in that respect.  One of our other flaggers got blasted, though.  Its a given that one douche motorist will surface at every race.

In 20-20 hindsight, the only thing I'd do different would be to stop one semi truck, who looked like he was gonna get through the intersection in time, but then slowpoked, and then took the turn way wide, crossing over the centerline into the lane of some racers. Timing can be tricky and it wasn't that big a deal, but next time I'll just stop his ass, and not worry about it.
﻿ ﻿ When it was safe and there was no traffic, I was able to take a couple pics from my corner, paddle in one hand, camera in the other . . .

Great job today by all the racers, organizers and volunteers.
Posted by Pat S at 11:52 PM

Thanks for helping out Pat!

Another one in the books. I'm glad that corner didn't give you too much headache. Did you see any "centerline problems" when the riders were turning?