I poke a lotta fun at myself, both on and off blog, about my decision to buy a multi-hundred-dollar pump bike, in light of the fact that Glen has dropped off a coupla older bikes that are great examples of what can be had for a fraction of the cost, and that go just as fast and are just as fun.

But to be serious for just a moment (don't get too used to it), I've got zero regrets about the expenditure. First off, it's getting ridden a LOT, by a lotta different people. If there's one major cause for regret, it's a bought bike that never gets ridden, and this is definitely not that bike.

Second off, I scrimp in certain areas of my life so that I can have a bike slush fund. It's not huge, and it's pretty bare at the moment, but when I wanna do something crazy like the pump track, it allows me to have a tiny bit of money to throw at it, to keep the momentum going. 10 yards of dirt and the new bike and a coupla hand and power tools were super slippery grease that I was able to pack into the bearings of this project.

And at the same time, I'm so grateful to have Glen's bikes around. The track is a tremendous tool in terms of skill-building and just plain head-slapping realization about how certain thing work, bike-wise, and having multiple bikes to play with on the track just totally magnifies and enhances the experience. For me and everyone else who shows up to ride. I've fallen in and out of love and then back in again with every one of mine and his bikes. Multiple times.

I really think that this is one of those times in life where I'm not gonna be able to fully appreciate all that's coming at me until I have some hindsight perspective. It's a small little backyard pumptrack, but the lessons are huge. Lucky little bastard am I.

Technically speaking, it blows my mind as to how two bikes with the same wheel size and pretty close to the same wheel base can be such totally different animals on the track.

I set up both bikes last night and took a tape measure to 'em . . . 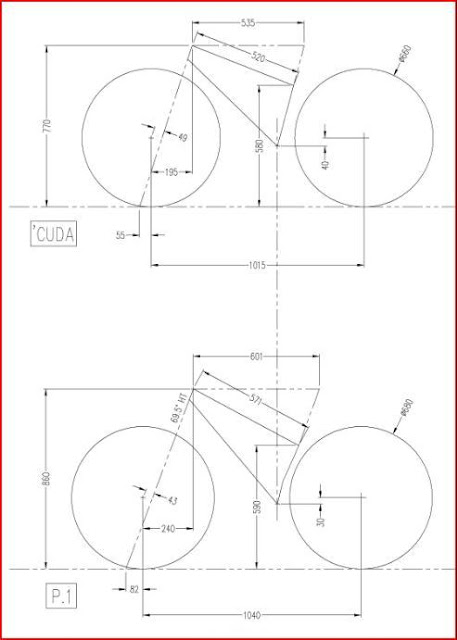 . . . a bit different in the front end then. I don't have a feel yet for exactly how all the geometry translates to what's happening on the track, but I hope that by the end of the summer, I'll be able to say, "Oh yeah, with that HT angle, you totally gotta get your weight over the bars when you hammer outta that corner." Or some stupid shit like that. That actually makes sense.
Posted by Pat S at 11:02 PM

One detail that your incredibly nerdy sketches do not reveal, is the new bar config on the P1. (The new bars do not rise as much and are wider -- I"m thinking they're about 800mm -- f'ing wide). We were both shocked at how much the new bar config changed the P1 -- I especially noticed that the front of the bike was more behaved, specifically: the front wheel stayed on the track instead of "bouncing" off a tick on the corners.

Here's a point: I think geometry matters a lot, but so, apparently, does the configuration of the components in how they position your body. Since there's really no butt-connection on pump bikes, you're left with feet and hand connections only. How well the bike lets you shift your weight around and where that weight ends up relative to the bike's "center" matters.

It's fun to watch different people on the same bike: the 'cuda tends to encourage what Glen calls "balling up," where the rider gets more compact, more squished down into the bike. Whereas the P1 tends to encourage a more "open" and "taller" ride -- I was watching Jake for a few mintues before I left last night on the P1: no balling up there. I wish I would've stuck around to see him on the 'cuda.

The P1 is a bigger bike: longer wheelbase, much longer effective TT, but I think the change in bar configuration may be a hint at another piece of the what-makes-a-perfect-pump bike enigma.

John, yeah, great observations. I've been thinking along the same lines about where a given bike "naturally" places your center of gravity based on where your feet and hands land and then how comfortably the same bike allows you to move your COG around.

The narrow vs wide handlebars is another interesting one - it's cool to have two bikes with bar widths so dramatically opposite, they both seem fast in their own way. I'm not even close to having that one figured out yet.

I don't believe in geometry (or even mathematics), but those frames look different from each other.

(VIDEO) Get your ex CRAWLING back to you...?