I only rode a total of something like 26 miles, but great shiz happened - it was the bike bomb.

It started out on Friday, with my first overnighter of the year.  My picture-taking was a total fail, mostly because my cam was unknowingly set to video mode.  From the one relic though, even upside down, I think you can see what a lovely evening it was.  Fortunately I righted the ship at the last second.  John has a proper write-up, with actual pictures, here.

On Saturday, the mailman made one of those special stops, where they drive their van to your house in particular and drop something off that's not the usual door-to-door stuff. It was a mailer tube from Wissahickon Cyclery in Philly, PA, whom I hadn't ordered anything from. Fabulous mystery. Inside was a poster: 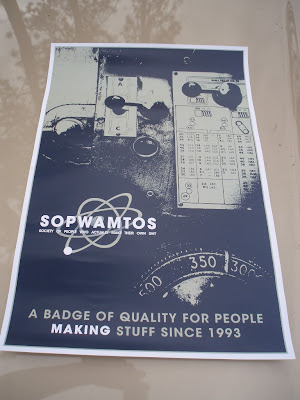 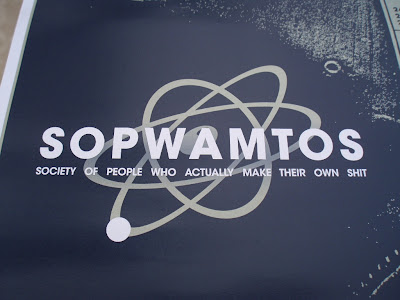 Just google SOPWAMTOS if you wanna know more.  THANK YOU to my off-season Kris Kringle for the compliment and the rad poster.  I totally dig it.

Also on Sat, Eric Erickson transacted for my Xtracycle.  I put a ton of money and energy into this bike, thinking I would use it a lot.  But I didn't, and it was time to let it go, and it would have sucked to have had to put it on craigslist.  Instead, it goes to a really great guy who will put it to seriously good use.  Sweet. 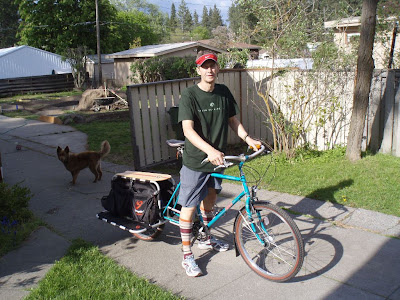 On Sunday this, Justin called and left a message saying he scored a bmx bike for the pump track stable. This is killer, because it's the 'missing link' in terms of having a pump bike on hand that will fit just about anybody who shows up. I can't wait to see what he's copped.

And finally, massive progress was achieved on the track this weekend. I needed, for sanity purposes, to reach some sort of conclusion. Not that it will ever be totally finished, but maybe an end to the really hard shit. Something feels 'done'. Major satisfaction rules then, tonight. It's a great track. I'm down with spending a little less time building and a bit more time riding. 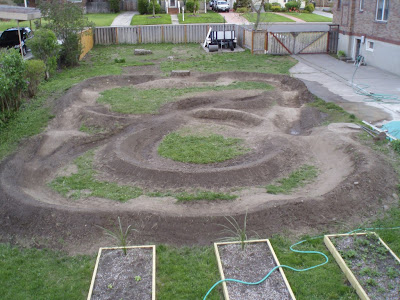 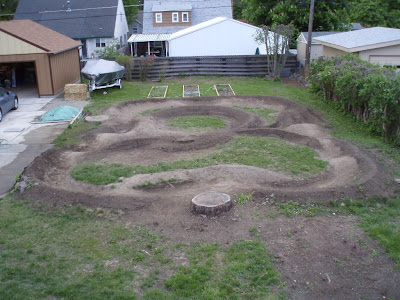 The completed(for now) track looks amazing. It looks like there can be some serious pursuit going on. You even managed to use the rest of the dirt. Simply amazing Pat.

I want to go to here.

I'd love to feel the special way a pump track kicks your ass.

I can NOT wait to ride that thing! Looks great, Pat.