All Is Right Again

Later last night, after a day of fulfilling my Mother's Day present to Patty by finishing the final details of the bathroom remodel, which are the ones that I historically never get done, which was why she so wisely leveraged her special powers of the day, I went to work on the pump track mud bog for a coupla hours, and then after that I wanted to square away the rear wheel of the Free Agent cruiser that Glen dropped off last week, which had wobbly bearings and a wobbly rim which I let bug me but which in hindsight I shoulda left the hell alone. 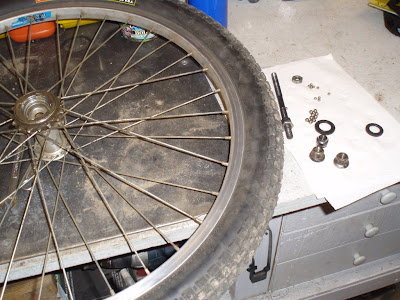 I was too tired and then I was in a hurry and things went sideways and I royally effed it up and ended up with a wheel that no longer worked and after trying for a while to right my wrongs, I finally gave up and went to bed in utter despair and spent part of what shoulda been a really good night of sleep staring at the ceiling. Pissed as hell.

I wasn't gonna let this cheap-ass, worn-out wheel ruin more than one day of my life, so I did the smart thing today by taking a deep breath, setting all my pride and angst free, and calling Glen.  He made incredibly short work of straightening things out. 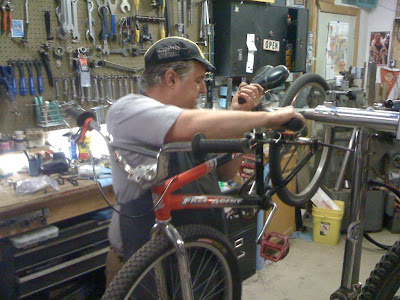 My emotions of joy and relief vastly ruled over having to face any realization that I'm a hack, and besides, I didn't have time to dwell on that . . . while I was there, something else sprang forth from Glen's pump track bike fountain . . . 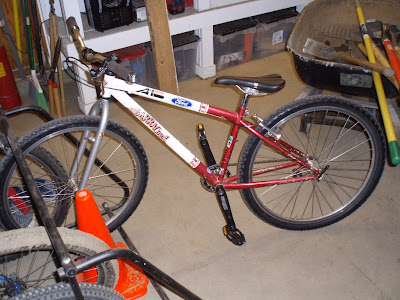 It's steel, with rad elliptical top and down tubes, a Ford decal, left-handed rear braking and it weighs a comparatively feather-like 24#. Tonight I've got something way better to think about while I stare at the ceiling.  Thanks, Glen.
Posted by Pat S at 11:11 PM

looks like a barracuda. we had one of those back in the day at the P2P garage. neat bike.