My first commute in a few months was filled with snafus.  It was a given that I forgot my cardkey.  I almost, but didn't quite, forget a towel (brain clicked in and woke me up in a panic at 2:36 am. If you've ever had to towel off after a shower with paper towels, you will understand why your mind will wake you up over this.)  Most were minor, though - the only major one was that I missed my bus on the way home. By a mere 30 seconds. I was watching that sucker the whole way, like one of those situations that is happening real-time but that your mind sees in slow motion.

Service cutbacks last fall affected me in that instead of the cush dropoff a half mile from work, it's now 3 miles. Oh, the injustice. Anyway, I mis-timed my connection and was faced with the decision to wait another 30 mins for the next one or just hoof it into town.  It wouldn't normally even be a decision of even have come up, except that I'm trying to be really conservative and gradual in terms of protecting my back from a relapse. Being down and out just so totally sucked.  But I was already rolling (furiously!), and sitting on a bench for half an hour just, well . . . wasn't gonna happen.

Good thing, too.  The weather today was so fab, especially knowing that it's turning to shit tomorrow and continuing as shit through the forseeable future. Not only that, but I discovered a sweet off-pavement stretch behind Spalding's wrecking yard.  It probably blows in the heat of July, but for now it's like rolling on green velvet. 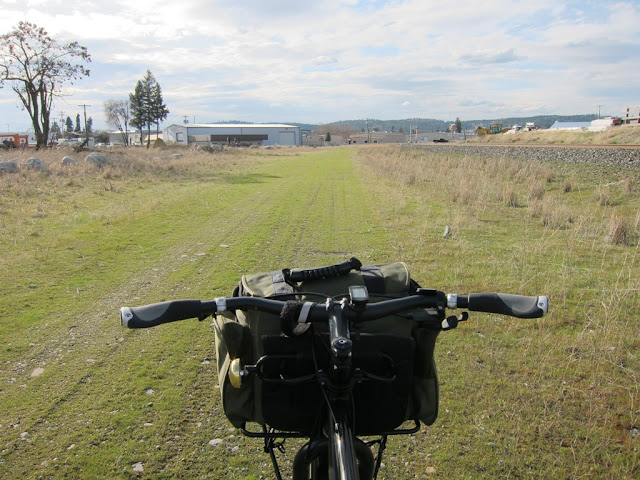 I was so pumped with the weather and my full-on commute that I even stopped for groceries on the way up the hill. 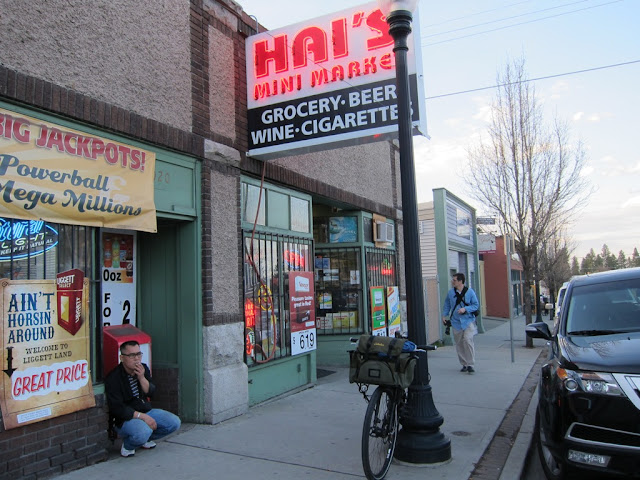 All up, 23 miles on a commuter-laden heavy turd of a bike and over 2 hrs in the saddle (please don't do the math, I know I'm slow) and my back is sore but not tortured and yes I will take it easy tomorrow and yes I have done extra stretching tonight. But allow me just a moment for a bigass minor personal celebration.
Posted by Pat S at 11:34 PM

Like a puppy chasing its tail, I too, have spun in circles doing the Dance of the Paper Towels while trying to dry my back.

Im really liking these posts. Is it strange that I am jealous of your 23 mile commute? 14 round trip seems weak now.

Saw you crossing Sprague @ park. I was easy to miss, the other cyclist in the intersection yelling Hey! Pat! Hey!

Congrats on being back in the saddle! My 7 mile commute makes me now feel like less of a man. I'll take the long way home tonight.

Hank, quite the accurate visual of the forgotten towel experience. And the reason I will probably never forget my towel again - even if it does come down to remembering it in the middle of the night.

Glen, after riding all that distance on flat ground at 12 mph, can't you understand that my peripheral vision and hearing were shot due to oxygen deprivation?

Jon and RinR, thanks. And I think your commute distances are just right. Mine is too long - I took the bus part of the way in the morning, but if I do the whole thing by bike, it's 34 miles round trip. That's a pretty big chunk of time and energy which means that it's damn hard to do on an everyday of even semi-regular basis. I think shorter commutes are just awesome in that they allow you way more easily work your bike commute into the routine and fabric and balance of your life.

glad to see you're back in the saddle. That trail by spaldings looks fun -It's always nice to discover new sections to ride.