Fatbiking Antoine Peak In The Snow

I had to go in to work today, which normally sucks on a Saturday, except that on this particular Saturday, it provided some synergy that sparked a ride that was so awesome that I had to sit in my truck for a few minutes after I was done riding and all loaded up, and just process what the hell had just happened.  It was that good.

Deal is, there's a fairly new conservation area close to where I work called Antoine Peak.  It's not huge and it's not probably the most awesome fair weather riding area, as it is mostly double  track, I think, and also it's pretty popular with the horse crowd. Although hikers and bikers are definitely allowed.  I've been wanting to get up there and check it out since I first heard about it late this fall from my co-worker Joe, but daylight savings hit me before I could hit it, and my after-work opportunity was gone for the season.

Apparently my subconscious idea-factory just couldn't let it go until next Spring, though. Maybe it got agitated by the images of those frosty, snow-covered hills that my eyeballs have been taunting it with during the drive to work these past few days. Whatever the cause, it popped back in my consciousness the idea of throwing my fatbike in the back of the truck today, with the the intent to do some exploring when the work was done.  Which turned out to be a great motivator to get the work done.

I had a little trouble finding the trailhead and pinballed around the rural roads in the area for a while, but finally found it. 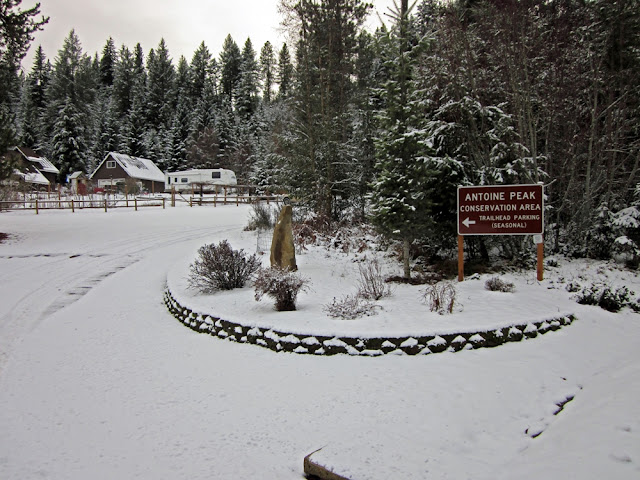 I was out of the truck and ready to ride in short order, but it was already 3:00 and as early as it gets dark these days, I set a hard limit of 3:45 for turning around on the climb up, if I didn't make it to the summit. 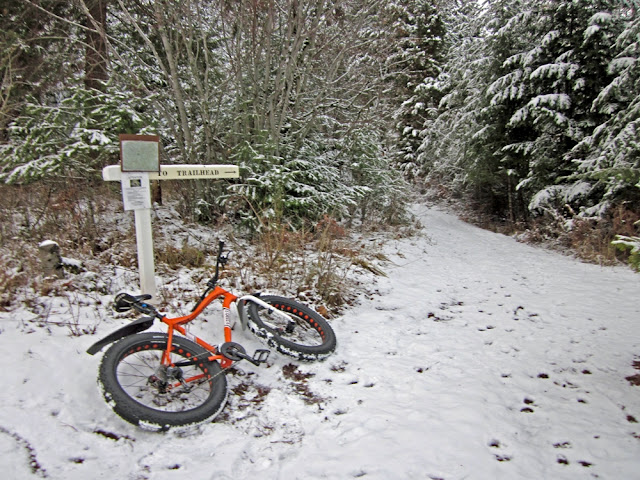 The decision was made easier by my vision of the rescue team finding me dead on the trail sometime tomorrow morning, next to the ashes of my beloved knards I had burned in an unsuccessful attempt to keep from freezing to death, my frozen face eaten off by a large cat.  Yes, I would turn around at 3:45. 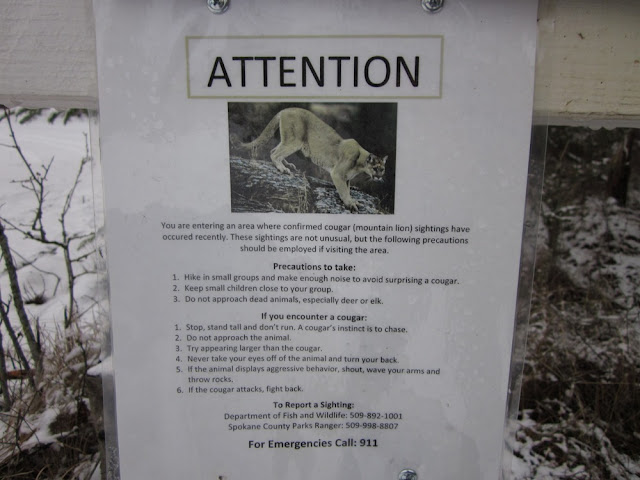 I'll stop and read this next, time, but for today, I was burning daylight. 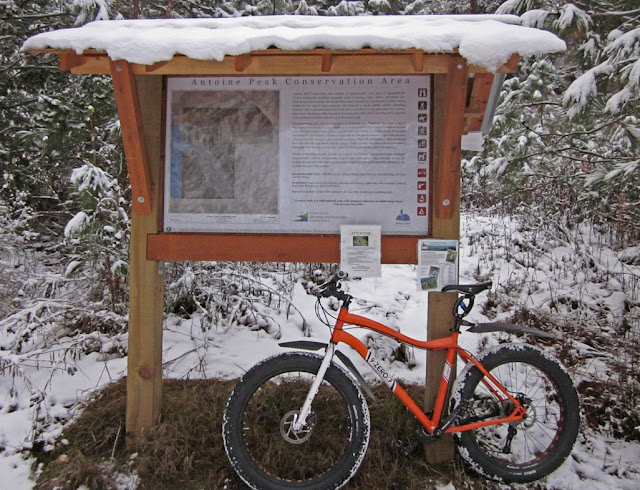 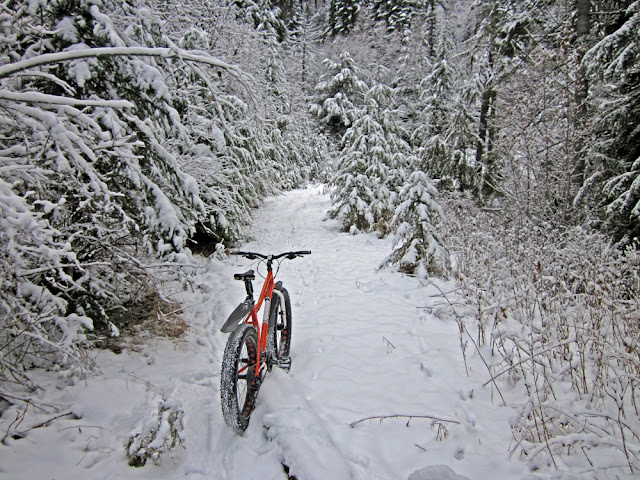 And then it got funner and beautifuller.  The snow was definitely getting deeper. 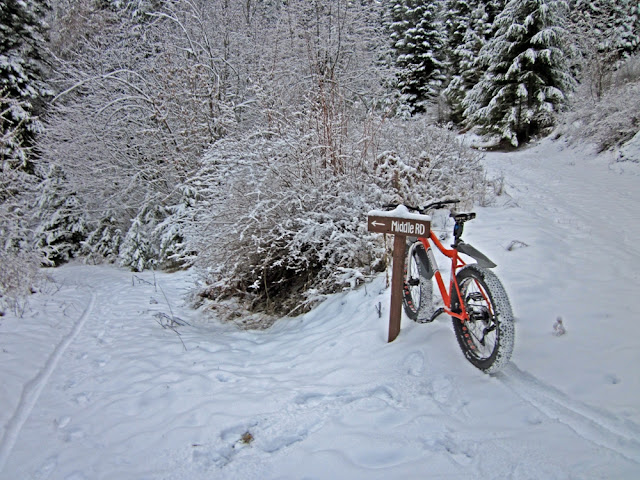 This is where my climb collided with my hard limit of 3:45.  Since the peak is supposed to have a 360° view, it would have to be at least as high as that ridge in front of me. So a ways to go yet. 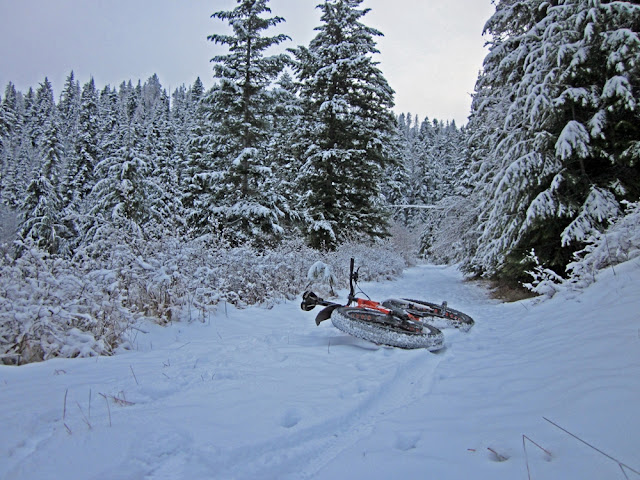 OTOH, I was up there a ways, so not too awful much farther, methinks. 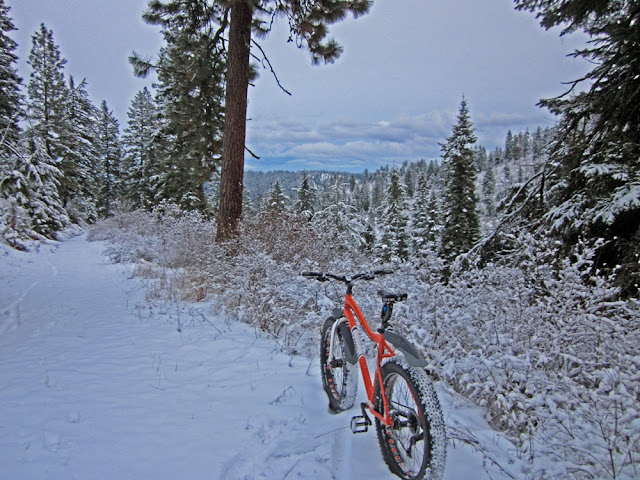 The descent was a blast and I cannot wait to get back before more snow accumulates and makes this unrideable.  Right now the type and amount of snow are just about perfect.

As far as this Antoine Peak Conservation Area in general, I'm pretty blown away.  I won't go as far as to say that I didn't support the purchase of the YMCA property with Conservation Futures dollars; I didn't like it and I wish there had a different alternative, but I'd have hated to see it go to the developers even more.  A tough decision that I hope we don't have to face again, because Antoine Peak is the perfect example of what/where/how Conservation Futures money should be used.
Posted by Pat S at 6:41 PM