One or two people have expressed interest in the Wheeliebike™ project. My apparently-starved ego apparently interprets the slightest amount of attention over some obscure topic like this as license to go on endlessly about it, which is why I'm about to go on endlessly about it. But in my defense, I mean really, who among us could possibly resist this kind of power, or at least the illusion of it?

Put your hand down, jerkwad. Whatever. I don't care. We're gonna talk about Wheeliebike™ fab minutia, whether you like it or not.

For starters then, I neutered my scooter: 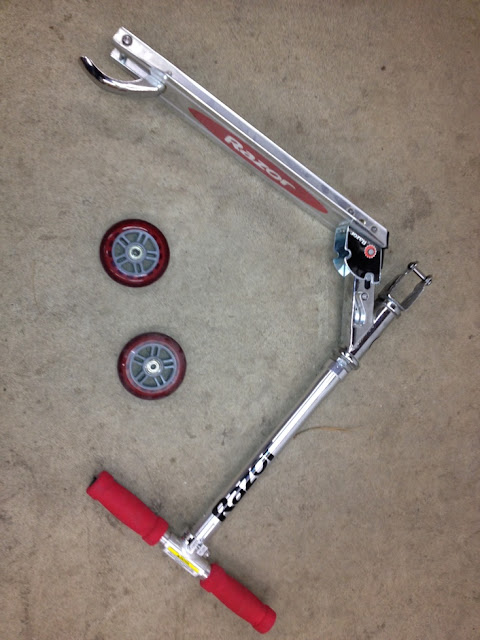 Sorry, shoulda warned ya to cover the kids' eyes. But they'll see this kind of thing before you know it, probably already have, so let's not overreact.

Subsequently, there was cutting and drilling. And then welding, which is where things got a little dicey . . .
You're not supposed to weld up galvanized stuff because it has major zinc in it, which during the welding process, turns into toxic gas which can just smite you. Or so legend has it.

Reason I mention this is because I determined that 5/8" nuts/screws were the right size for the job, but all I had in stock was the galvanized version. I debated the whole safety thing for a coupla tenths of a second, but I have a production schedule to maintain and so I proceeded to open the garage door on this 27 degree night and set up a fan to blow all the nasty smoke outta my face and into the atmosphere.  I also held my breath during the welding process, for good measure. 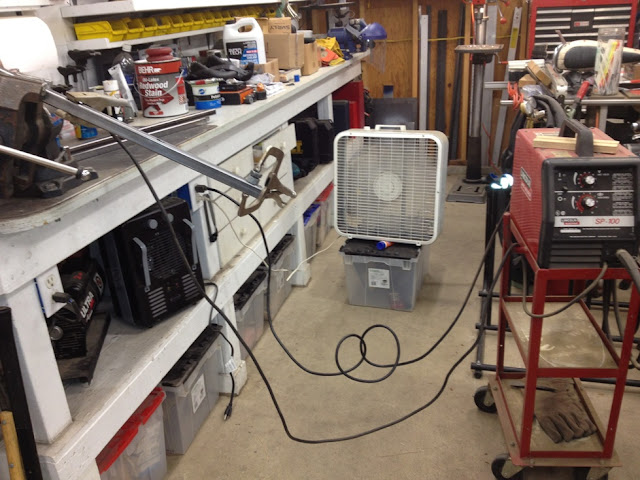 Mighta worked, becuase I feel pretty good at the moment, but that could also be the beer talking. Bottom line though, is that the wheeliebar sub-assembly part of the project is his-to-ry, baby! 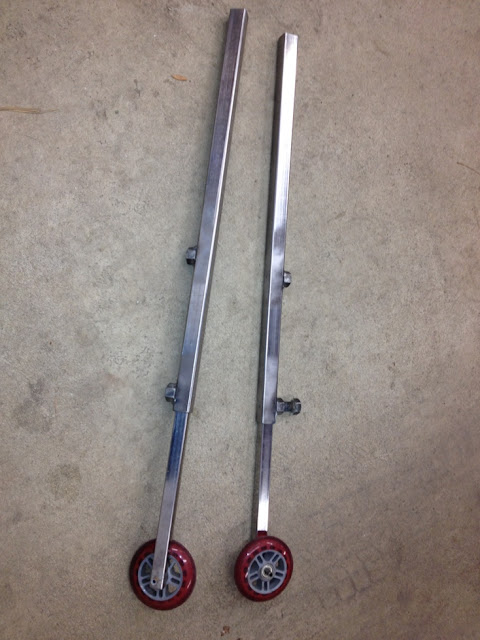 No, your eyes are not deceiving you: Duallies. Hell yeah. What's the sense in doing something, if you're not gonna do it right?
Posted by Pat S at 11:33 PM

I just have to tell you how excited I am about this project.

This is gonna be sick! Can't wait to see more.

I share the excitement of the other readers. The wheelie has haunted me for years on the trail.

Having hairline fractured my wrist trying to "teach" my kids how to wheelie this project has peaked my interest for sure.

I can't wait until the wheelie project combines with the frozen pumptrack project.

All the time spent building wheelie bars should be spent just practicing wheelies. That is unless the actual goal is to be featured on "there I fixed it- redneck repairs".

Get professional trading signals sent to your mobile phone every day.